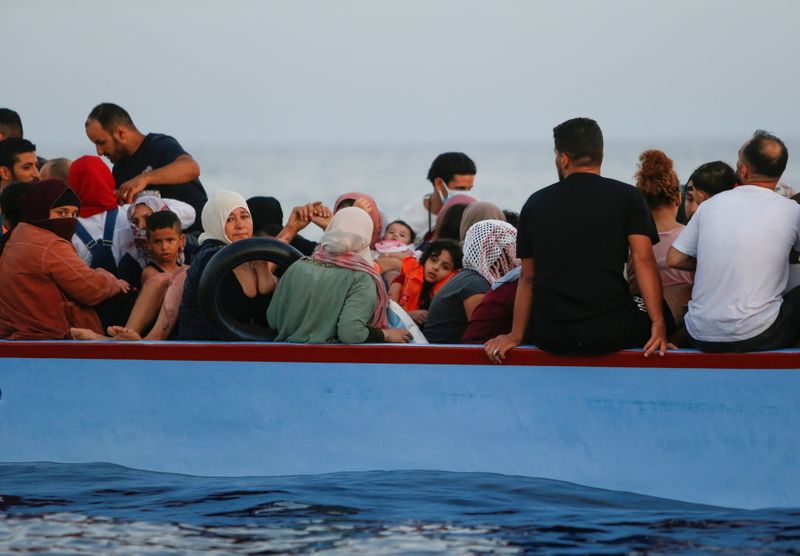 Migrants wait in a wooden boat to be rescued by the German NGO migrant rescue ship Sea-Watch 3 in international waters off the coast of Libya, in the western Mediterranean Sea, July 30, 2021. REUTERS/Darrin Zammit Lupi

ABOARD SEA-WATCH 3, Mediterranean (Reuters) - German NGO Sea-Watch said on Friday it had rescued nearly 100 migrants in the Mediterranean overnight, many of whom were injured, some with severe "fuel burns" - chemical burns caused by exposure to gasoline mixed with seawater.

Migrant boat departures from Libya and Tunisia to Italy and other parts of Europe have increased in recent months with better weather.

According to the U.N.'s International Organization for Migration (IOM), more than 1,100 people fleeing conflict and poverty in Africa and the Middle East have perished this year in the Mediterranean.

Late on Thursday, the vessel Sea-Watch 3 rescued 33 migrants from two boats which had been intercepted by the Libyan coast guard in the search and rescue zone of the Mediterranean assigned to Malta, the NGO said.

Among them were nine unaccompanied minors, of which three were very small children, and a woman who was seven months pregnant. The rescued came from South Sudan, Tunisia, Morocco, Ivory Coast and Mali, according to a Reuters witness aboard the Sea-Watch 3.

Many migrants were already on a coast guard ship but jumped into the sea when they saw the NGO vessel approach, according to the witness. All were brought onboard the Sea-Watch 3 by its crew.

In a second operation at dawn on Friday, Sea-Watch 3 rescued over 60 people from an overcrowded wooden boat within the Libyan search and rescue zone. Most of the rescued were Libyans, the Reuters witness said.

Among the migrants being treated for their injuries on board the Sea-Watch 3 on Friday were a father and son who suffered burns after a fire broke out on their boat, while others suffered fuel burns.

"As it is often the case with such boats, many of the people suffered fuel burns, some of them severe," Sea-Watch said in a statement.