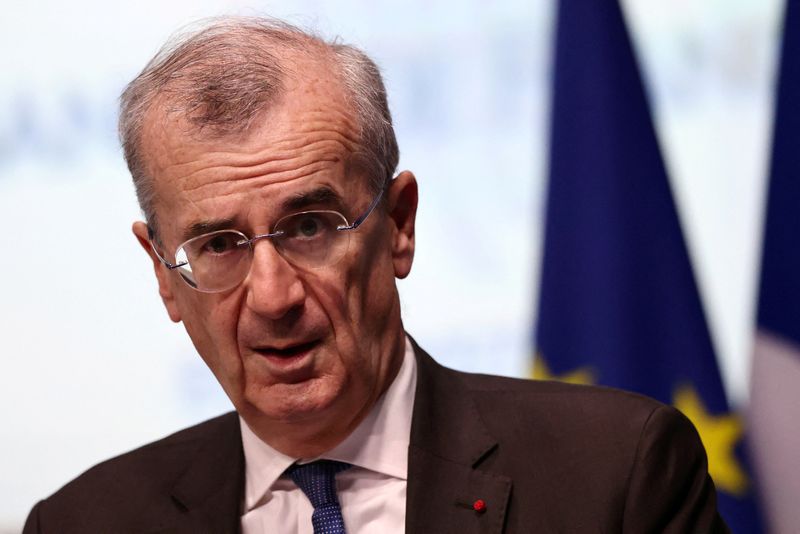 PARIS (Reuters) - The French state cannot afford to bear alone the economic fallout from the Ukraine crisis, the country's central bank governor said on Thursday as the government prepared to bring a new round of inflation-relief measures to parliament.

Bank of France Governor Francois Villeroy de Galhau said that households would have to face a temporary drop in purchasing power and companies smaller margins as the state could not adopt the "whatever it costs" approach, with which it supported the economy during the worst of the COVID pandemic.

In an annual letter to President Emmanuel Macron, Villeroy said France's economic problems could no longer be addressed by adding to the debt burden, noting that the European Central Bank had every intention to raise interest rates soon.

"Clearly the era of negative or zero interest rates is over; we need to spurn the seductive but dangerous illusion that French public debt comes without costs and limits," Villeroy said.

Urging a "credible and ambitious" debt reduction plan, he added that France's political credibility with its EU partners and investors alike was at stake.

With the crisis driving inflation to a record 6.5% in June, President Emmanuel Macron's government is due to present on Thursday a new package of inflation-relief with measures ranging from pay increases for civil servants to the extension of a state-financed rebate on fuel prices at the pump.

While the government expects better than budgeted tax income this year to cover the extra costs of the measures, opposition lawmakers are eager to add costly new amendments that would further strain the public finances.

Far-right and hard-left parties won big gains in parliamentary elections last month, robbing Macron's party of its controlling majority and setting the stage for a first political battle under the new order over the inflation-relief bill.

Villeroy said the government needed to cap spending growth in the coming years and carry out economic reforms, such as an overhaul of the pension system, which is anathema to both the far-right and left-wing parties in parliament.