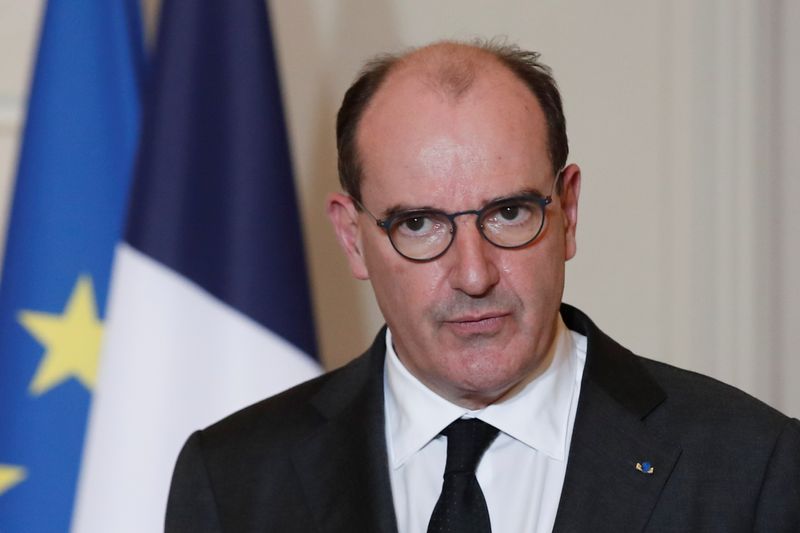 French Prime Minister Jean Castex delivers a speech after a meeting, amid the outbreak of the coronavirus disease (COVID-19), at the Elysee Palace in Paris, France, January 29, 2021. REUTERS/Benoit Tessier/Pool

PARIS (Reuters) - France decided against imposing a third coronavirus nationwide lockdown on Friday and instead ordered tighter controls at its borders, increased police action against curfew breakers and a greater adherence to working from home.

"We know the grave impact (of a lockdown). Tonight, looking at the data of the past few days, we consider that we can still give ourselves a chance to avoid one," Castex said in a televised statement.

Speaking shortly after President Emmanuel Macron conferred with senior ministers about the crisis, Castex said that from Sunday all arrivals into France from outside the European Union would be banned, except for essential travel.

All visitors from EU nations would need to show a negative PCR test except cross-border workers and truckers.

"Our duty is to do all we can to avoid a new lockdown, the coming days will be crucial," Castex said.

The prime minister also said non-food shopping centres with a surface area of more than 20,000 square metres would be closed, home-working rules would be reinforced and that police would crack down on secret parties and illegal openings of restaurants.

"The transgressions of a few will not be allowed to ruin the efforts of all," he said.

Less than a week ago, the government's top scientific adviser on the epidemic said that France probably needed to move into a third lockdown, perhaps as early as the February school holidays, because of the circulation of new variants of the virus.

A shortage in vaccine supplies from pharmaceutical firms Pfizer and Moderna has resulted in a sharp slowdown in France's vaccine deployment.

The health ministry said in a statement that 1.45 million people had been vaccinated so far.