Four years into voyage and metres from land, tanker crew still stuck aboard 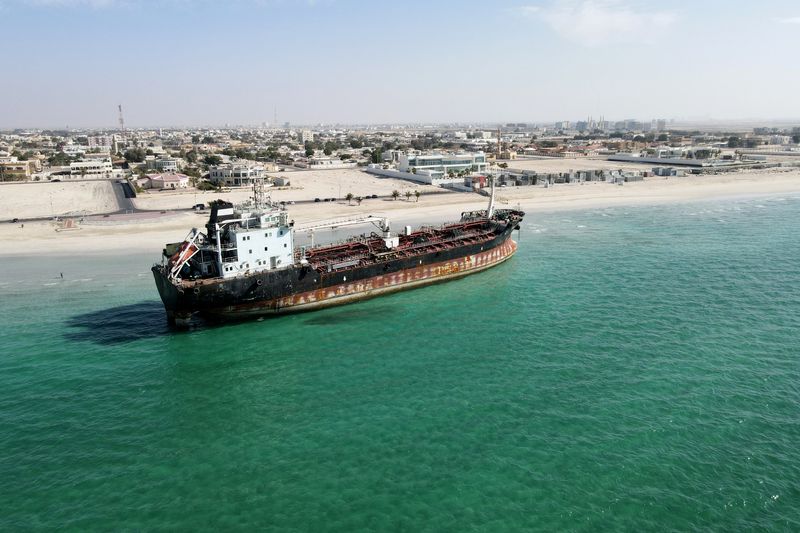 DUBAI (Reuters) - Nearly four years into their odyssey at sea, the five-member crew of oil tanker MT Iba is tantalisingly close to shore, yet still unable to set foot on dry land.

Bleary-eyed and wearing tattered clothes, the men are exhausted from an ordeal that has kept them from their families and aboard the 5,000-tonne vessel long after its owner abandoned it in the Gulf.

What started out as a regular seafaring job turned into what the men call a nightmare, when the tanker's owner, Alco Shipping, fell into financial trouble and stopped paying their salaries 32 months ago.

The crew was left to fend for itself, relying on donations from charities they contacted for food and hygiene supplies.

The tanker ran aground in Umm Al Quwain, one of the seven emirates that make up the United Arab Emirates, in late January, after rough seas severed both of its anchors and pushed it to shore.

Life aboard the ship has been arduous, said Indian engineer Vinay Kumar.

"We've seen hell during this voyage," Kumar told Reuters during a recent visit aboard the battered ship. "We are like slaves ... We're begging for food."

Alco Shipping did not immediately respond to a request for comment.

The Mission to Seafarers, a charity which offers emergency assistance and support to sailors, has been providing regular food aid and checking on the sailors' wellbeing since their ship was first abandoned.

The crew is collectively owed around $230,000, said the charity's regional director Andy Bowerman, who is helping mediate negotiations between the sailors and Alco Shipping.

Bowerman said the company had just offered to settle with the sailors for $150,000, although it is not clear if the crew will accept the lower sum.

Bowerman said if they did not accept the offer, they would remain on board until a resolution was reached, as the vessel provided their only leverage against the company.

Maritime laws also mean that if they abandon the ship, they could be detained and held responsible.

For Nay Win, an engineer from Myanmar, there is an added complication: his passport, still in the company's possession, expired while he has been at sea. And with the recent military coup at home, he is unsure how to get a new one.

"For 43 months how would you feel?" said Pakistani engineer Riasat Ali. "It's like we are staying in jail - they are not giving a salary nor sending us home."