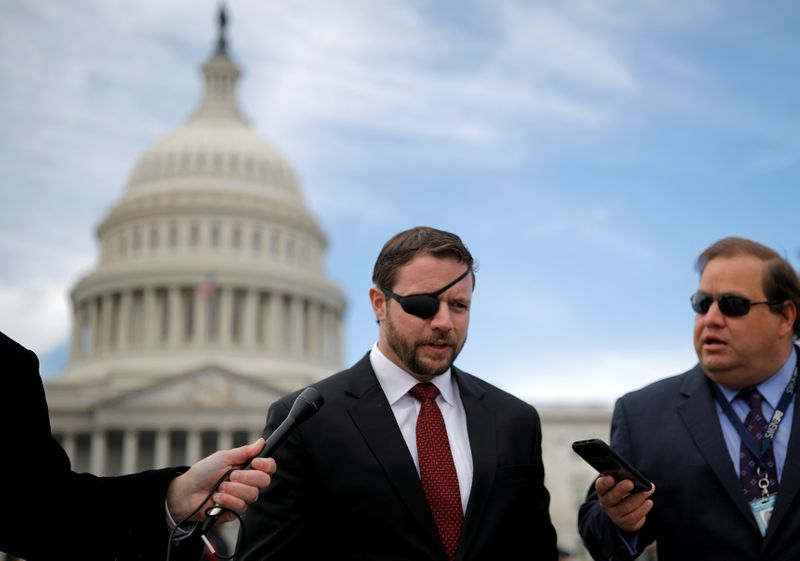 FILE PHOTO: Republican Representative-elect Dan Crenshaw talks with reporters as he arrives for a class photo with incoming newly elected members of the U.S. House of Representatives on Capitol Hill in Washington, U.S., November 14, 2018. REUTERS/Carlos B

WASHINGTON (Reuters) - U.S. Representative Dan Crenshaw, a former Navy Seal who lost his right eye in an explosion in Afghanistan, said on Saturday he will take a month-long leave of absence from Congress after emergency surgery for a detaching retina in his other eye.

"The surgery went well, but I will be effectively blind for about a month," the Texas Republican wrote in a statement on Twitter. He said his congressional offices will remain open but apologized to constituents for being "pretty much off the grid for the next few weeks."

Crenshaw, 37, a former Navy lieutenant commander who served in Afghanistan and Iraq, said the retina in his left eye appeared to be detatching as a result of extensive damage suffered in a 2012 attack in Afghanistan's Helmand Province.

"Anyone who knows the history of my injuries knows that I don't have a 'good eye,' but half a good eye," Crenshaw said in the statement.

"This is a terrifying prognosis for someone with one eye,"

he added. "I have gotten through worse before, and I will get through this."

Crenshaw, who wears an eyepatch, made national headlines in 2018 when comedian Pete Davidson mocked his appearance on Saturday Night Live. The joke was widely criticized. But Crenshaw appeared on the show alongside Davidson a week later to accept his apology.