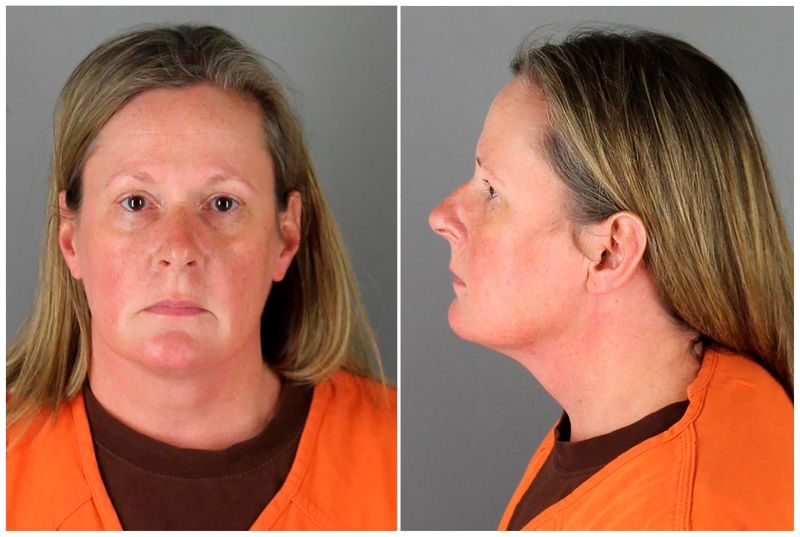 By Jonathan Allen and Maria Caspani

MINNEAPOLIS (Reuters) -The former Minnesota police officer charged with manslaughter in the fatal shooting of a young Black man during a traffic stop made her first court appearance on Thursday as the slain motorist's family called for "full accountability" for his death.

Kimberly Potter, 48, who turned in her badge on Tuesday and posted $100,000 bond hours after her arrest on Wednesday, appeared for the online video hearing seated with her lawyer in his office. The proceeding lasted just a few minutes.

Potter, wearing a plaid shirt, was not asked any questions about the case or her intended plea, and spoke only to say: "Yes, I am," when asked to affirm her attendance for the record.

She waived her right to a formal reading of the criminal complaint charging her with second-degree manslaughter over the fatal shooting of 20-year-old Daunte Wright on Sunday in the Minneapolis suburb of Brooklyn Center.

Police pulled over Wright for what they said was an expired vehicle registration tag that led officers to find an outstanding warrant for his arrest on a misdemeanor firearms offense.

The city's police chief said the next day that it appeared from video of the incident that Potter, assigned as her young partner's training officer, had mistaken her gun for a Taser when she shot Wright.

During Wednesday's hearing, Hennepin County Judge Paul Scoggin set the next court date for May 17 and ordered the 26-year veteran officer, who is white, to refrain from using firearms for the duration of her case.

Before the hearing, members of the Wright family and their lawyers gathered at the church in Minneapolis where his funeral will be held next Thursday to remember the father of a 2-year-old son and press for an aggressive prosecution of Potter.

ANGER IN THE STREETS

The shooting of Wright sparked nightly demonstrations and civil unrest in Brooklyn Center, just miles from the courthouse where a white former Minneapolis policeman is standing trial on murder murder charges over kneeling on the neck of George Floyd, a 46-year-old Black man arrested on suspicion of passing a bogus $20 bill last May.

About 400 demonstrators rallied outside the Brooklyn Center police headquarters again on Thursday evening, many of them lighting candles at dusk.

Some individuals in the crowd shouted taunts at sheriff's deputies or National Guard troops posted on the opposite side of a double barricade of concrete and chain-link fencing in front of the building. Protesters also tossed water bottles and other objects over the barricades periodically.

Law enforcement, visible in fewer numbers than previous nights, held their ground and largely refrained from engaging with the crowd, as darkness fell and a 10 p.m. curfew neared. The crowd was also smaller than earlier in the week.

Tensions on the street have eased since Potter's arrest on Wednesday.

In trying to win a second-degree manslaughter verdict, prosecutors must show that Potter was culpably negligent and took an "unreasonable risk" in shooting Wright.

Police video of the incident shows Potter threatening to stun Wright with her Taser before firing her handgun. Former Police Chief Tim Gannon, who also resigned on Tuesday, said she mistakenly used her service weapon instead of her Taser.

In the video, Potter can be heard shouting: "Taser, Taser, Taser!" as she draws her gun and opens fire on Wright in his car after he had just broken away from a fellow officer trying to handcuff him.

Potter is then heard saying: "Holy shit, I just shot him."

The medical examiner determined Wright died of a single gunshot wound to the chest, ruling the case a homicide.

If convicted, Potter faces a maximum sentence of 10 years in prison and a $20,000 fine. Her lawyer, Earl Gray, did not respond to a request for comment before the hearing.

Benjamin Crump, a lawyer for the Wright family, said the shooting reflected a broader problem of law enforcement in the United States using excessive force and having a propensity to "overpolice marginalized minorities, especially Black men."

But Crump said the move to charge Potter also represented some progress following the lack of prosecutions of officers involved in the deaths of Black men such as Eric Garner and Michael Brown in recent years.

"All this family is striving for is to get full accountability, get equal justice. Nothing more and nothing less," Crump told the briefing at the New Salem Missionary Baptist Church.