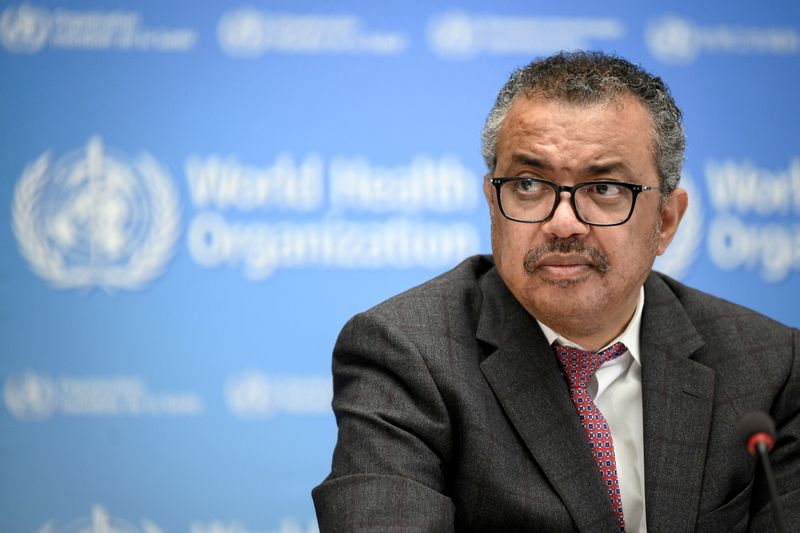 By Stephanie Nebehay and Mrinalika Roy

GENEVA (Reuters) -Europe is once again the epicentre of the COVID-19 pandemic amid a "false sense of security" over the protection offered by vaccines, World Health Organisation director-general Tedros Adhanom Ghebreyesus said on Wednesday.

WHO officials warned that the SARS-CoV-2 virus would keep spreading intensely as societies return to the social mixing and mobility of a pre-pandemic period in the run-up to the year-end holidays.

Last week, more than 60% of all reported cases and deaths from COVID-19 globally were in Europe, Tedros told a news conference.

"In many countries and communities, we are concerned about a false sense of security that vaccines have ended the pandemic, and that people who are vaccinated do not need to take any other precautions," he said.

"And the reality is the virus will continue to transmit intensely in that environment,â he said.

WHO epidemiologist Maria van Kerkhove said that it was important to take measures during the holiday period, adding: "Social measures do not mean lockdowns."

WHO chief scientist Soumya Swaminathan, asked about the European Union's new recommendation for COVID-19 boosters for people over 40, said that the priority should remain inoculating all adults and the most vulnerable groups first.

"Focus on the unvaccinated and high-risk groups," she said.

Tedros voiced hope that a consensus can be found at World Trade Organization ministerial next week for an IP waiver for pandemic vaccines, already supported by more than 100 countries.

He was encouraged about a 'broad consensus' being reached on an international agreement on preventing pandemics at his agency's separate meeting of health ministers from its 194 member states next week.

He stopped short of calling for a "treaty" - as sought by many European Union members and other states but said it should be a "binding pact" to manage future pandemics better.