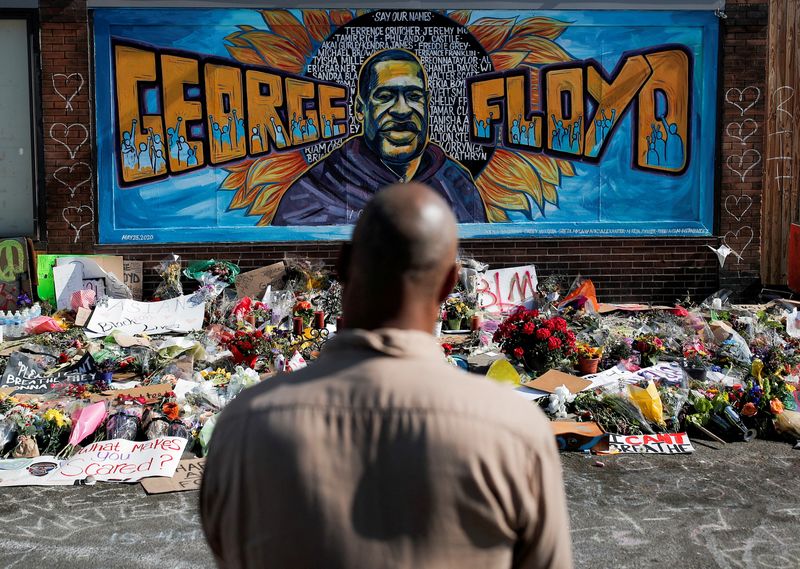 FILE PHOTO: A local resident stands in front of a makeshift memorial honoring George Floyd, at the spot where he was taken into custody, in Minneapolis, Minnesota, U.S., June 1, 2020. REUTERS/Carlos Barria/File Photo

(Reuters) - Three former Minneapolis police officers who took part in the arrest of George Floyd are on trial in St. Paul on federal charges that they violated the civil rights of the murdered Black man.

Last year, their former colleague Derek Chauvin https://www.reuters.com/world/us/ex-policeman-derek-chauvin-be-sentenced-george-floyds-murder-2021-06-25, 45, was found guilty of murder and manslaughter in Floyd's death at the end of a nationally televised state trial in April 2021, and a Minnesota judge sentenced him to 22-1/2 years in prison.

Chauvin, who is white, was also charged alongside his colleagues by federal prosecutors with violating Floyd's civil rights in their capacity as police officers. Chauvin changed his plea to guilty last December. Thao, Kueng and Lane https://www.reuters.com/legal/government/derek-chauvins-ex-colleagues-face-trial-over-deadly-minneapolis-arrest-2022-01-24 have all pleaded not guilty in the federal case.

All three men, currently free on bail, are also due to face trial in Minneapolis in June on state charges that they aided and abetted second-degree murder and second-degree manslaughter of Floyd.

Aiding and abetting murder is punishable by up to 40 years in prison, although sentencing guidelines can reduce the maximum to 15 years.

The following is a summary of the roles played by Thao, Kueng and Lane in the arrest of Floyd, based on the complaint filed by prosecutors in the Minnesota attorney general's office:

Kueng and Lane were the first officers to arrive outside Cup Foods, the grocery store where Floyd was accused of using a counterfeit $20 bill to buy cigarettes.

During the fatal encounter, state prosecutors said Kueng was between Chauvin and Lane, kneeling on Floyd's back, with his hand on Floyd's handcuffed left wrist.

After Floyd became unresponsive, it was Kueng who checked his right wrist for a pulse and said, "I couldn't find one," prosecutors said in their complaint. None of the officers moved from their positions, the complaint said.

Having arrived at the scene with Kueng, it was Lane who ordered Floyd out of his car and handcuffed him, prosecutors said.

Chauvin, Kueng and Lane each used their weight to restrain Floyd on the ground after he balked at getting into the back of a squad car. Lane was positioned on his legs, "kneeling on them and pressing them down with his hands," according to the complaint.

At one point, Lane asked, "Should we roll him on his side?" Chauvin responded: "No, staying put where we got him." Lane then said, "I am worried about excited delirium or whatever," to which Chauvin said, "That's why we have him on his stomach."

Thao arrived on the scene with Chauvin after Floyd had already been handcuffed.

Although Thao was the only one of the four officers who was not in physical contact with Floyd, prosecutors said he had a direct look at how Chauvin and the others were restraining him.

Thao stood watch over the onlookers who were gathering at the scene, keeping himself positioned between them and the three other officers who were on Floyd's prone body.

When a bystander stepped off the curb, "imploring Chauvin to get off of Mr. Floyd, (Thao) put his hands on the citizen to keep him back," the complaint said.