Factbox-Timeline of the Ahmaud Arbery case 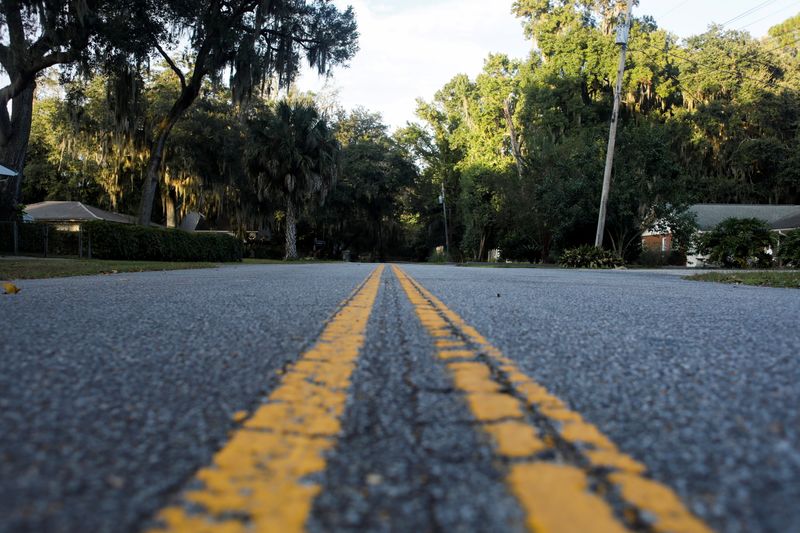 FILE PHOTO: View of a road at the Satilla Shores subdivision where Ahmaud Arbery was shot to death while going for a run in February 2020 in Brunswick, Georgia, U.S. October 21, 2021. REUTERS/Octavio Jones/File Photo

(Reuters) - Ahmaud Arbery, a 25-year-old Black man, was running through a mostly white neighborhood on Feb. 23, 2020, when he was chased by three white men in two trucks and shot to death. The killing took place about two miles (3.2 km) from his mother's house near Brunswick, Georgia.

Here is the timeline of the case:

Arbery left his mother's house before 1 p.m. on Sunday for a jog just outside coastal Brunswick, Georgia, his aunt, Thea Brooks said.

He crossed a four-lane highway into the Satilla Shores subdivision, lined with saw palmettos, old oaks draped with Spanish moss, and ranch-style homes with boat docks along the Little Satilla River.

About two miles (3.2 km) into his run, he passes Greg McMichael, who is in his driveway working on boat cushions. McMichael later tells police he thought Arbery might have been running from a crime. He yells to his son Travis McMichael to get a gun and they both give chase in a pickup truck, police reports say. They are then joined by a neighbor, William "Roddie" Bryan, in his own pickup truck, who videos part of the encounter on his cellphone.

After being boxed in by the trucks, Arbery is seen on video reaching for a shotgun leveled at him by Travis McMichael. Arbery is fatally shot three times, turns to run one last time, and falls prone on the street.

Johnson recuses herself from the case because of her connection with McMichael and informally hands it over to the Waycross Judicial Circuit.

Barnhill recuses himself from the case, telling his boss, Georgia Attorney General Chris Carr, that he didn't realize his son had previously worked with Greg McMichael in Johnson's office.

A Brunswick radio station, WGIG, is given a copy of Bryan's video of the shooting by an attorney and posts it online. It becomes widely distributed on the internet, sparking a national uproar. Within hours, Durden announces a grand jury investigation. The same day, Georgia Governor Brian Kemp orders the Georgia Bureau of Investigation (GBI) to take the case.

GBI investigators arrest the McMichaels, charging them each with murder and other crimes. This is 74 days since the shooting.

GBI agents arrest Bryan and charge him with murder.

Johnson, who had been the Brunswick Judicial Circuit's district attorney for 10 years, loses her re-election bid, following a grassroots campaign against her spurred by the Arbery case.

Johnson is indicted by a grand jury, which accused her of "showing favor and affection" to the McMichaels. She is charged with violation of oath of office and obstructing a law enforcement officer.

She has told the media that she did nothing wrong and is currently out on $10,000 bond.

The trial starts. It takes 13 days to seat a jury of 11 white people and one black person. All three men are being tried jointly.

(Reporting by Rich McKay in Atlanta; editing by Jonathan Oatis)