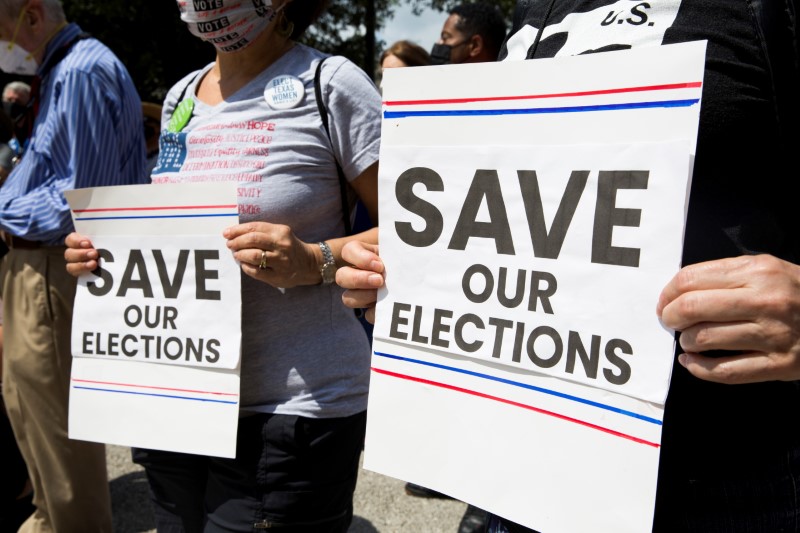 FILE PHOTO: Protesters show support for voting rights during a rally against Texas legislators who are advancing a slew of new voting restrictions in Austin, Texas, U.S., May 8, 2021. REUTERS/Mikala Compton

WASHINGTON (Reuters) - Republican lawmakers in a number of politically significant states have passed a wave of new voting requirements and limits this year, saying the measures are needed to curb voter fraud, despite scant evidence of it in the United States.

The Republican-controlled Michigan state Senate passed three bills on Wednesday expanding voter identification requirements in the state. The measures will next be considered by the Michigan House of Representatives, where Republicans also have a majority. Governor Gretchen Whitmer, a Democrat, is unlikely to sign them into law.

The legislation would require in-person voters lacking photo ID to cast a provisional ballot and verify their identities within six days, rather than signing an affidavit attesting to their identities and voting normally, as current law allows. It would also add identification requirements to absentee voting.

A Pennsylvania House of Representatives committee on Tuesday approved a Republican-backed package of voting restrictions that would require election officials to verify voters' signatures with ballot-sorting machines, limit ballot drop-box use and eliminate the state's permanent mail-voting list, forcing voters to apply for mail ballots before each election.

Democratic Governor Tom Wolf has said he will veto the bill if it reaches his desk, but Republican lawmakers are expected to reintroduce the measure as a proposed constitutional amendment that would be subject to a public referendum. A state Senate committee on Tuesday endorsed another proposed constitutional amendment that would expand voter identification requirements.

Republican Governor Greg Abbott, a strong supporter of the measure, vowed to add the bill to a special legislative session later this year. The Republican-majority legislature is expected to pass the bill when it comes up in the special session, although some Republican lawmakers have said the bill erroneously shortened Sunday early voting hours and needed revision.

Republican Governor Doug Ducey signed a law on May 11 to stop counties from automatically mailing Arizonans early ballots if they do not use them often enough. The legislation will remove voters from the stateâs âEarly Voting Listâ if they fail to submit an early ballot at least once every two election cycles.

Republican lawmakers in most other states have bundled voting restrictions into sweeping bills to pass them in one go, but they are taking a piecemeal approach in Arizona. Other voting hurdles still pending in the stateâs legislature include bills that would ban automatic and Election Day voter registration.

A law signed by Republican Governor Ron DeSantis on May 6 imposed additional requirements on requesting and submitting absentee ballots. Absentee voters must submit new proof of identity when requesting their ballots and reapply for absentee ballots in each new general election cycle, rather than every two cycles.

The law also limited the use of absentee drop boxes to the early voting period, gave partisan election observers more power to raise objections and required people offering voters assistance to stay at least 150 feet (45 m) away from polling places, an increase from the previous 100-foot (30-m) radius.

One of the most contentious new voting measures passed in Georgia, where Republican Governor Brian Kemp signed a law on March 25 that tightened absentee ballot identification requirements, restricted ballot drop-box use and allowed a Republican-controlled state agency to take over local voting operations.

Critics said the legislation aims to disenfranchise Black voters, who helped propel Biden to the presidency and deliver Democrats two U.S. Senate victories in Georgia in January that gave them control of the chamber. Top U.S. companies also decried Georgiaâs law, and Major League Baseball moved its All-Star Game out of the state in protest.

Republican Governor Kim Reynolds signed a law on March 9 that shortened the stateâs early voting period and Election Day polling-place hours, imposed tighter deadlines for absentee ballots to be submitted, and made it a felony for election officials to disobey guidance from Iowaâs secretary of state, who is currently a Republican.