Factbox: What Biden plans to do next on refugees, separated families and regional migration 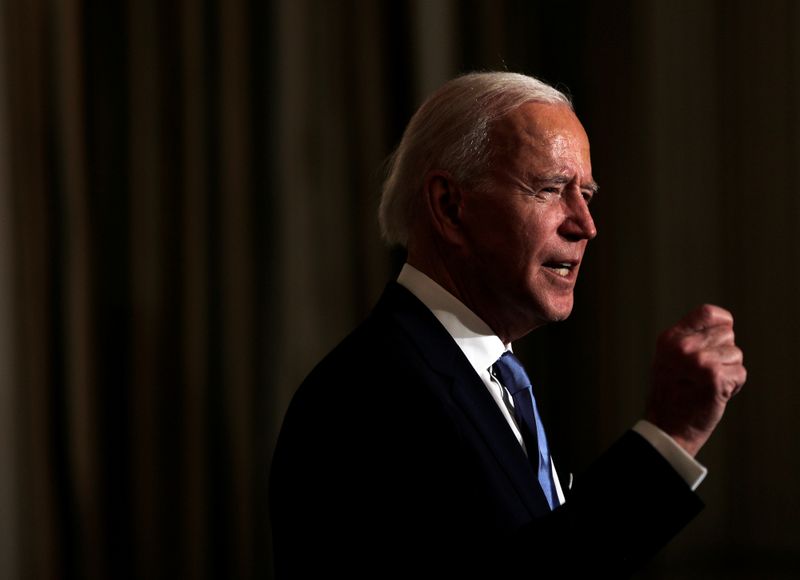 FILE PHOTO: U.S. President Joe Biden swears in presidential appointees in a virtual ceremony in the State Dining Room of the White House in Washington, after his inauguration as the 46th President of the United States, U.S., January 20, 2021. REUTERS/Tom

By Ted Hesson and Kristina Cooke

(Reuters) - U.S. President Joe Biden is expected to issue executive orders on asylum at the U.S.-Mexico border, refugee resettlement and the reunification of migrant families, according to a Biden transition team memo shared with lawmakers and recent comments by an administration official.

The orders had been planned for Friday, according to the memo and people familiar with discussions. But the White House has now pushed back the time line and it remains unclear when it will take place.

Biden, a Democrat, has vowed to reverse many policies put in place by former Republican President Donald Trump, a process that could take months or years.

Biden plans to undo some of Trump's asylum restrictions and take actions to address the root causes of migration, a White House official said on Saturday during a United States Conference of Mayors virtual event.

Biden will unwind a Trump program known as the Migrant Protection Protocols (MPP), the official, Esther Olavarria, deputy director of the Domestic Policy Council, said in a recording reviewed by Reuters.

The Biden administration said last Wednesday it would end all new enrollments in the MPP program, which has forced more than 65,000 asylum seekers back to Mexico to wait for U.S. immigration court hearings. But it did not give more information on what would happen to the thousands of people currently in Mexico.

In the executive orders, Biden will call to end asylum agreements struck by the Trump administration with Guatemala, El Salvador and Honduras, Olavarria said.

Biden will also restore a program that allows certain children in the three nations to apply for refugee status in the United States from their home countries, according to Olavarria.

The orders will call for the strengthening of asylum protections in Mexico and other countries so that migrants can seek refuge "closer to home," she said.

Additionally, Biden plans to roll back a Trump rule that sought to block asylum seekers who pass through another country en route to the United States, according to a person briefed on discussions.

Biden will create a task force to reunite migrant families who were separated at the U.S.-Mexico border by Trump's immigration policies, Olavarria said.

Parties in a lawsuit over the separations have been unable to reach the parents of more than 600 children, according to a court filing this month.

Biden will issue an executive order that would remove barriers to legal immigration and promote citizenship, according to Olavarria.

The Biden administration will begin the process of reversing Trump's "public charge" rule, which makes it harder for immigrants who are poor or need certain government benefits to secure residency and stay in the country, according to two people familiar with the plans.

Olavarria said on Saturday that Biden would rescind several Trump proclamations. She appeared to reference one that barred certain visa applicants who could not prove they had health coverage and two others that banned the issuance of many work and immigrant visas, which Trump said would protect American jobs during the coronavirus pandemic.

CHANGES TO THE REFUGEE PROGRAM

Biden is expected to lay out principles that will guide his administration's global refugee policy in one of his executive orders.

Biden is not expected to immediately raise the refugee limit. Instead, the Biden administration will follow a formal process that involves consulting with Congress, according to two people familiar with the plan.