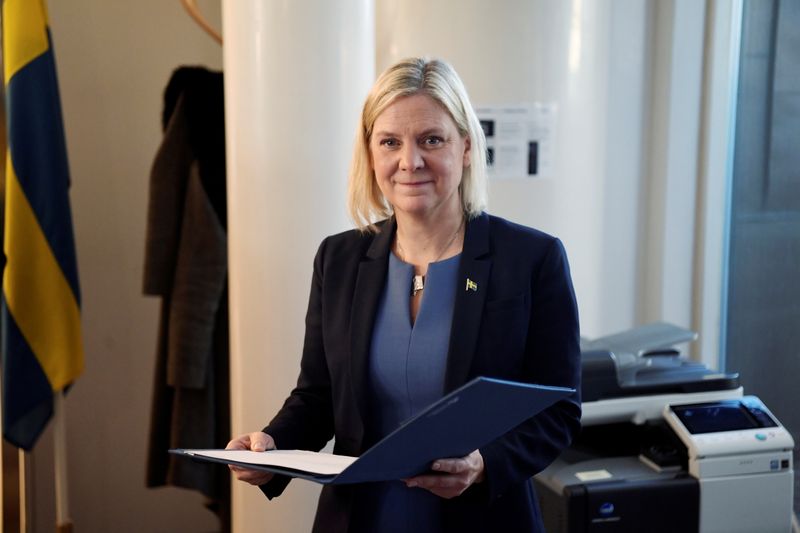 Current Finance Minister and Social Democrat leader Magdalena Andersson attends a press conference after being appointed as the country's new Prime Minister following a voting at the Swedish Parliament Riksdagen in Stockholm, Sweden November 24, 2021. And

Her minority government faces major challenges, not least passing its budget in the face of a fragmented parliament.

WHO IS MAGDALENA ANDERSSON?

- Andersson was an elite swimmer as a youth.

- She graduated from the prestigious Stockholm School of Economics before being recruited into politics by former prime minister Goran Persson.

- Andersson was deputy head of the tax agency between 2009 and 2012 while the Social Democrats were out of office.

- Andersson will head a weak, minority coalition with the Green Party which relied on support from the Left and Centre parties under her predecessor Stefan Lofven.

- That alliance has split with the Centre Party refusing to back the budget. If the government's finance bill fails to pass, the Green Party has said it will consider leaving the government.

- While the centre-left bloc is disunited, the opposition is in little better shape.

- A centre-right coalition of the Moderates and Christian Democrats is backed by the populist, anti-immigration Sweden Democrats. But the alliance cannot command a majority.

- Sweden will hold a national election in September 2022 with the centre-left and centre-right blocs essentially deadlocked.

- Andersson has said she will continue as PM even if parliament rejects the government's budget on Wednesday and she is forced to implement policies put forward by the centre-right opposition.

- Outside of party politics, a top worry for voters is gang violence. Shootings have become an almost daily occurrence. Many see it as a sign that Sweden has failed to integrate immigrants who have arrived in the country in the last few decades.

- Sweden has a target of reaching net zero emissions by 2045 and will need to speed up the pace of action on climate change to reach that goal.

- Despite championing equality, Sweden has lagged neighbour Norway by 40 years in appointing a female prime minister. Finland got its first female premier in 2003 and Denmark in 2011.

- Sirimavo Bandaranaike became the world's first female prime minister when she was elected to lead Sri Lanka in 1960.