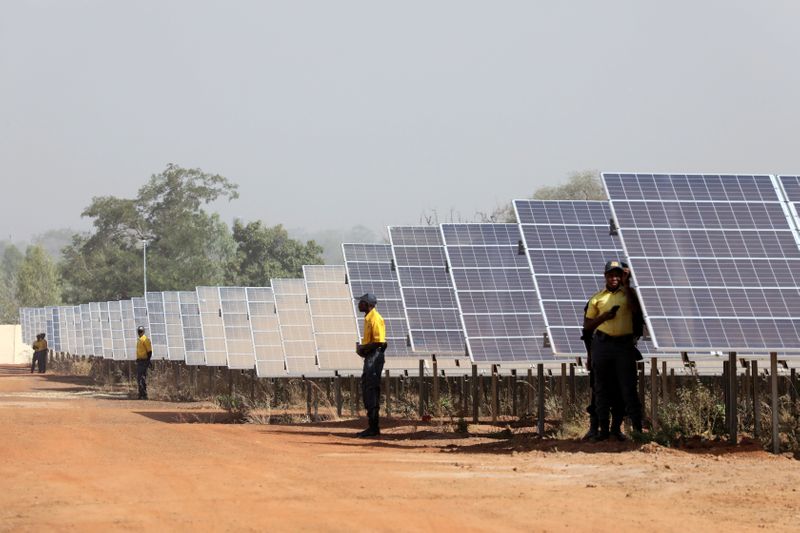 WASHINGTON/BRUSSELS (Reuters) - A revised World Bank policy on climate change commits to making financing decisions in line with efforts to limit global warming, but stops short of promising to halt funding of fossil fuels, according to a draft bank presentation seen by Reuters.

The World Bank, the biggest provider of climate finance to developing countries, is finalizing a new five-year climate action plan amid growing political momentum in Britain, the United States and other countries for ending public financing of high-emission fossil fuel projects.

In a sharp reversal from the former Trump administration, the United States, the bankâs largest shareholder, is drafting plans under the new Biden administration to end U.S. financing for international fossil fuel projects.

An internal presentation outlining the World Bank's new climate plan, seen by Reuters and due to be discussed by the bank's board on Thursday, commits to "align its financing flows with the objectives of the Paris Agreement" by July 2023.

The plan is not final and must still be approved by the bank's board.

The World Bank declined to comment on the presentation.

The Paris Agreement, adopted in 2015 by nearly 200 countries, pledges to stop global average temperatures from rising more than 2 degrees Celsius above preindustrial levels, and aims to cap warming at 1.5 degrees. Scientists say meeting the 1.5 degree goal, which would prevent the most catastrophic climate impacts, would require the world's net greenhouse emissions to drop to zero by 2050.

The bank's sister organizations, the International Finance Corporation and Multilateral Investment Guarantee Agency, will align 85% of their direct financing with the Paris Agreement by July 2023 and 100% by July 2025, the presentation said.

Meeting the goals of the Paris pact will require trillions of dollars of investments to shift quickly away from burning fossil fuels for energy, and expand renewable electricity along with low-carbon transport and manufacturing technology.

The presentation repeated a pledge the bank made in December for an average of 35% of its financing to be climate-related over the next five fiscal years. That compares with 26% of a significantly smaller amount of lending over the last five.

The bank and its sister organizations exceeded its target in the last three years to increase climate finance to 28% by 2020, spending $21.4 billion on climate finance last year, the presentation said.

Nicholas Stern, a former chief economist at the World Bank and now a professor at the London School of Economics, said the plan was "quite ambitious" and marked a significant change from the bank's previous policies.

"The World Bank is moving in a good direction, and itâs a major step along the way," said Stern, who is familiar with the bank's plan. He added that while the bank had already begun shifting its focus toward climate issues, the change in U.S. administration had accelerated the process.

Kevin Gallagher, director of the Boston University Global Development Policy Center, said he hopes the bank will help countries transition away from coal. Reuters showed him the document.

"The new climate action plan is a major step for the bank and moves it from thinking about green projects to greening entire economies," he said.

The World Bank in 2013 reduced its new coal power investments to "only in extremely rare circumstances," and stopped funding upstream oil and gas operations in 2019.

World Bank board members from Europe in February urged the bank's management to use the new climate plan to halt all investments in oil- and coal-related projects, and to gradually phase out investment in natural gas projects.

The draft presentation did not include these commitments.

The bank will assess gas projects on a case-by-case basis and will support the transition away from coal, it said.

Environmental campaigners said the presentation was disappointing and failed to specify what aligning with the Paris Agreement meant - raising the risk that the pledge would yield little change in practice, including in the bank's approach to fossil fuels.

"This is not good enough and needs to be radically overhauled," said Kate Geary, co-director of public finance watchdog Re-Course, after Reuters showed her the presentation. "There are very few targets for the bank to held accountable to."

"There was some hope that it would be more ambitious. There is really no clarity on what Paris aligned means. It is possible to be more specific," said Gaia Larsen, senior associate at the World Resources Institute's Sustainable Finance Center, after Reuters showed her the document.

(Reporting by Valerie Volcovici and Andrea Shalal in Washington and Kate Abnett in Brussels; editing by Katy Daigle and Lisa Shumaker)