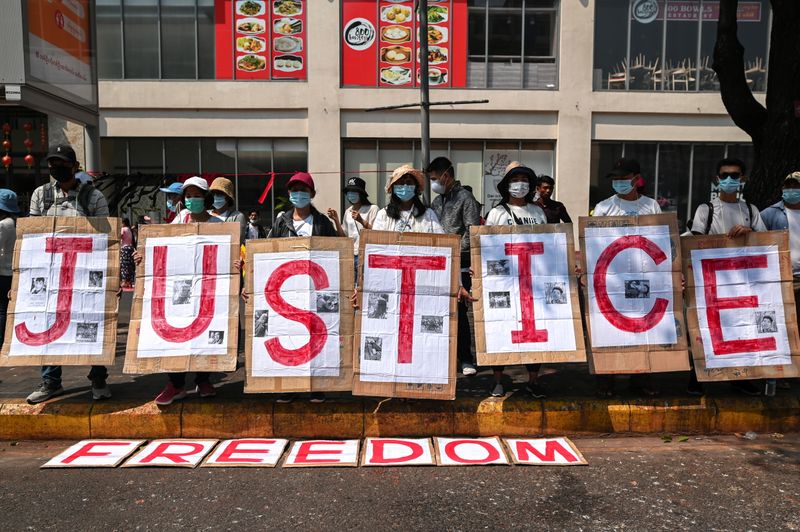 People hold placards to form the word "Justice" during a protest against the military coup in Yangon, Myanmar, February 22, 2021. REUTERS/Stringer

JAKARTA (Reuters) - Indonesia is pushing Southeast Asian neighbours to agree on an action plan over Myanmar's coup that would keep the junta to its promise of holding elections, with monitors to ensure they are fair and inclusive, three sources familiar with the move said.

The proposal from the biggest regional nation falls short of the public demands of protesters and some Western countries for the immediate release of elected leader Aung San Suu Kyi and the recognition of the Nov. 8 ballot her party won in a landslide.

Two senior officials, speaking on condition of anonymity, told Reuters a diplomatically-led solution had to focus on preventing bloodshed and helping the military to honour its commitment to hold a new election and hand power to the winner.

Protesters have scorned the junta's promise of a new election, saying it should recognise the one held last year. The army staged the coup after the electoral commission rejected its accusations of fraud in the November poll.

But the junta has not given a timetable for a fresh vote.

The U.N Security Council, China, the European Union and the United States, among others, have urged the Association of Southeast Asian Nations (ASEAN) regional grouping to help mediate in the crisis.

The Indonesian plan also calls for ASEAN to facilitate dialogue between the junta and protesters, according to the two officials, and a third source familiar with it.

An Indonesian foreign ministry spokesman declined to comment on the proposal, saying Foreign Minister Retno Marsudi "will make an announcement after she has completed her consultations with other ASEAN foreign ministers".

Retno has been travelling across Southeast Asia to rally support among ASEAN's disparate membership for a special summit of foreign ministers on the Myanmar crisis.

Indonesia's proposal has strong support from several ASEAN countries, but the diplomatic effort underway is challenging, the three sources said.

ASEAN is governed by consensus decision-making.

Its members range in diversity from Indonesia, the world's third biggest democracy, to communist one-party states Vietnam and Laos and one of the world's last absolute monarchies, Brunei. Myanmar is also a member, as are Cambodia, Malaysia, the Philippines, Singapore and Thailand.

One of the senior officials said denouncing the coup was easy but concrete progress depended on engaging with the secretive military, a task ASEAN was best placed to execute, given its regional standing and relationships.

"This is our family so our approach will be different," the official added.

The two senior officials, and a regional diplomat, told Reuters that some ASEAN countries and Indo-Pacific nations were involved in "back channel" talks with some of the junta, urging compromise and no repeat of past bloody crackdowns on dissent.

"The message we want to send to Myanmar is you are facing a different situation to the past," the senior official said.

But persuading Myanmar to participate in the proposed ASEAN special summit was proving difficult, the two senior officials said. Initially, it rejected an invitation from ASEAN chair Brunei, saying the coup could be discussed at a scheduled meeting of ASEAN foreign ministers in August.

Myanmar's government spokesman and foreign minister did not respond to requests from Reuters for comment.

One possible compromise was to hold the summit at the ASEAN secretariat in Jakarta and not explicitly say it was about Myanmar, the two officials said.

It was crucial for ASEAN to act strongly on Myanmar, said

Dewi Fortuna Anwar, a foreign policy analyst based in Jakarta.

"If ASEAN does nothing, it will lose credibility," she said. "Its claims to centrality in the Indo-Pacific will be shot down."