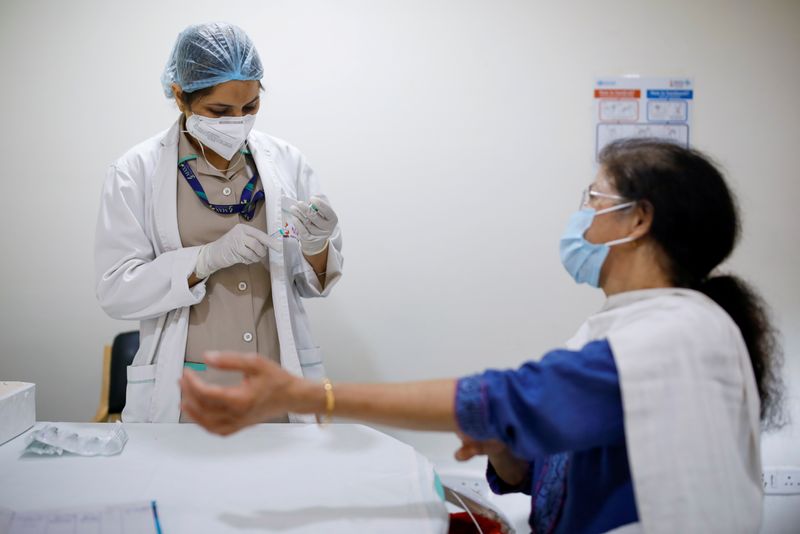 FILE PHOTO: A woman watches as a healthcare worker fills a syringe with a dose of COVISHIELD, the coronavirus disease (COVID-19) vaccine manufactured by Serum Institute of India, at Max Super Speciality Hospital, in New Delhi, India, March 17, 2021. REUTE

NEW DELHI (Reuters) - India has put a temporary hold on all major exports of the AstraZeneca coronavirus shot made by the Serum Institute of India (SII), the world's biggest vaccine-maker, to meet domestic demand as infections rise, two sources told Reuters.

The move will also affect supplies to the GAVI/WHO-backed global COVAX vaccine-sharing facility, through which 64 poorer countries are supposed to get doses from the SII, the programme's procurement and distributing partner UNICEF told Reuters.

Deliveries will be delayed in March and April "as the government of India battles a new wave of COVID-19 infections," GAVI, an alliance of countries, companies and charities that promote vaccination, said in a statement https://www.gavi.org/news/media-room/covax-updates-participants-delivery-delays-vaccines-serum-institute-india-sii-az.

COVAX was in talks with India to "ensure some supplies are completed during March and April," it said, adding that the SII had supplied 28 million doses to COVAX. An additional 40 million doses had been expected in March and up to 50 million doses in April.

An Indian government source said New Delhi had not imposed any ban on vaccine exports "unlike many other countries," and that it would continue to supply doses in phases.

"We remain committed to help the world with vaccines, including through the COVAX facility," said the source, declining to be named.

But the source said it may be necessary to adjust supply schedules given India's vaccination needs.

"All stakeholders would have to work together to adjust the schedules as required," the source said.

India's foreign ministry and the SII did not reply to requests for comment.

"Everything else has taken a backseat (to India's needs), for the time being at least," said one of the sources.

"No exports, nothing till the time the India situation stabilises. The government won't take such a big chance at the moment when so many need to be vaccinated in India."

India has so far exported more than 60.5 million doses in total, according to the foreign ministry's website https://www.mea.gov.in/vaccine-supply.htm, and many countries are relying on the COVAX programme to immunise their citizens.

The SII has already delayed shipments of the AstraZeneca drug to Brazil, Britain, Morocco and Saudi Arabia. British authorities are in touch with New Delhi to get its second batch of 5 million doses ordered from SII.

Indian Prime Minister Narendra Modi, however, will gift 1.2 million doses of the shot to Bangladesh when he visits the neighbouring country on Friday, Abul Bashar Mohammad Khurshid Alam, head of the Directorate General of Health Services in Bangladesh, told Reuters.

COVAX has a deal to buy 1.1 billion doses of the AstraZeneca and Novavax shots that the SII is making in bulk, mainly for low- and middle-income nations, including its home country.

India will widen its inoculation drive next month by including everyone above 45, and many states battling a surge in infections have demanded that all adults be covered. Currently, only the elderly and those over 45 with other health conditions are eligible for vaccinations in India.

With 11.8 million cases, India has reported the highest number of coronavirus infections after the United States and Brazil.

India has so far administered more than 54 million doses, of which 49 million are the SII's locally-made version of the AstraZeneca vaccine. The rest is the COVAXIN vaccine developed in India by Bharat Biotech.

The government has so far asked the SII to supply around 141 million doses. The company has also accounted for nearly all of India's vaccine exports.

The SII plans to boost monthly production to 100 million doses from April/May, from up to 70 million now, Reuters reported earlier this month.