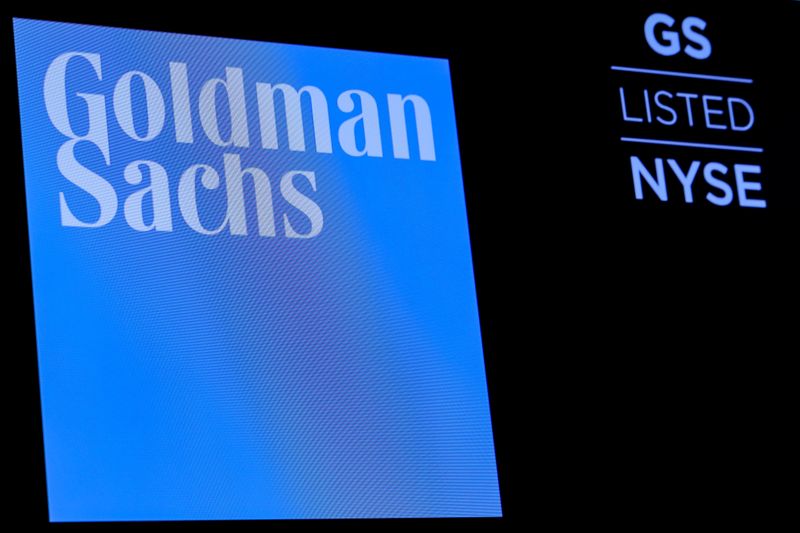 FILE PHOTO: The ticker symbol and logo for Goldman Sachs is displayed on a screen on the floor at the New York Stock Exchange (NYSE) in New York, U.S., December 18, 2018. REUTERS/Brendan McDermid/File Photo/File Photo

BOSTON (Reuters) - Two Goldman Sachs Group Inc (NYSE: GS) money-market funds, whipsawed in March by billions of dollars of investor withdrawals, have steadily amassed a liquidity cushion much larger than rivals, as the $4.35 trillion industry braces for the outcome of the U.S. presidential election and another global surge in coronavirus cases.

The fundsâ weekly liquidity - a barometer of how quickly investments can convert to cash in a week - rose to 85% of total assets this week, according to disclosures https://www.gsam.com/content/gsam/us/en/advisors/fund-center/fund-finder/gs-financial-square-prime-obligations-fund.html#activeTab=holdings by the bank. That is about double the level when Goldman Sachs in March injected nearly $2 billion of the bankâs own capital into the funds to prevent them from falling below the regulatory weekly liquidity threshold of 30%.

âWe actively manage liquidity in our funds as dictated by the market environment,â Goldman said in an email statement.

Average weekly liquidity at about 111 U.S. prime institutional money-market funds, like the Goldman funds, was 66% at the end of September, up from 54% in the year-ago period, a Reuters analysis of U.S. regulatory filings show. Those 111 funds hold about $300 billion in assets, or 9% of the $4.35 trillion in money funds.

Although they are among the tamest investment vehicles, prime funds can be riskier than money-market portfolios that primarily hold U.S. government bonds. The upside is they may offer more yield from holding short-term debt issued by an array of top-rated global banks, for example.

Despite regulatory efforts to make institutional prime money-market funds more resilient in times of stress, they remain vulnerable to massive withdrawals, especially by clients who need cash immediately to meet their own obligations. A U.S. official recently warned that decade-old reforms to the industry may not be enough to avert major outflows during a future crisis.

Stocks have swung significantly in recent days and more volatility is expected in the wake of the U.S. election.

Meanwhile, the 30% liquidity threshold's link to redemption gates has become an area of concern in the money fund industry. Investors see it as a bright line for slowing or blocking withdrawals, even though no fund boards used redemption gates or fees during the height of the March crisis.

A Northern Trust Corp (NASDAQ: NTRS) prime fund twice fell below the 30% threshold, but redemptions were not blocked. The bank, however, liquidated the fund in May.

And that is what happened during the early days of the coronavirus pandemic. Investors pulled a net $8.1 billion from the GS Financial Square Prime Obligations Fund

Over the two-week period from March 11 to March 24, net redemptions from publicly-offered prime institutional funds totaled 30 percent of the fundsâ assets, or about $100 billion, according to an October report released by the Securities and Exchange Commission.

American households who parked their cash in retail prime funds were less twitchy, the SEC says. Withdrawals totaled $33 billion in March, or 7% of assets.

In the months after the first wave of coronavirus cases, some of the biggest players in the U.S. money market industry pulled the plug on prime institutional funds. The preference for funds primarily holding government debt, by institutions and households, has become clear, as assets in these portfolios topped $4 trillion this year.

Boston-based Fidelity Investments, for example, shut down two prime funds in August, even though their liquidity cushion was never threatened, citing the risk of large and frequent redemptions in times of market stress.