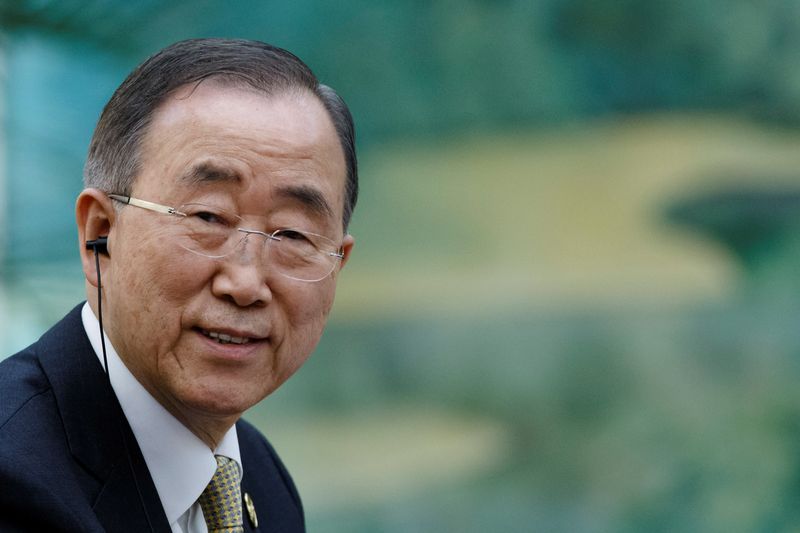 NEW YORK (Reuters) -Former U.N. chief Ban Ki-moon urged his successor on Monday to engage directly with Myanmar's military to prevent an increase in post-coup violence and said southeast Asian countries should not dismiss the turmoil as an internal issue for Myanmar.

U.N. Secretary-General Antonio Guterres' special envoy on Myanmar, Christine Schraner Burgener, has communicated with the military since it ousted an elected government led by Aung San Suu Kyi on Feb. 1, but the army has not allowed her to visit.

"Given the gravity and urgency of the situation, I believe the secretary-general himself should use his good offices to engage directly with the Myanmar military, to prevent an escalation of violence," Ban, secretary-general from 2007 to 2016, told a U.N. Security Council meeting.

Guterres is "very actively involved" on Myanmar and "has been for a long time," said U.N. spokesman Stephane Dujarric, adding: "His good offices, along with his special envoy, are always available. We all want to see an end to the violence."

Guterres told the Security Council on Monday that a "robust international response grounded on a unified regional effort" was needed, urging "regional actors to leverage their influence to prevent further deterioration and, ultimately, find a peaceful way out of this catastrophe."

The 10-member Association of Southeast Asian Nations (ASEAN) has been trying to find a way out of the violence tearing at fellow member Myanmar. Junta chief Min Aung Hlaing is due to attend an ASEAN summit in Indonesia on April 24.

"ASEAN must make it clear to the Myanmar military that the current situation is so grave that it cannot be regarded only as an internal matter," said Ban, a former South Korean foreign minister who is now a member of The Elders global leaders group.

According to the Assistance Association for Political Prisoners activist group, 737 people have been killed by security forces since the coup and 3,229 remain in detention.

"The military's use of lethal force and the gross violations of human rights being perpetrated against the civilians are not compatible with the ASEAN Charter," he said. "These actions are clear violations of international law, and constitute a threat to the peace, security and stability of the region."

Ban also urged the Security Council to move beyond statements to collective action. However, some diplomats say Russia and China are likely to prevent any stronger action.