Europe should invest in chip design, not a mega-fab: think tank 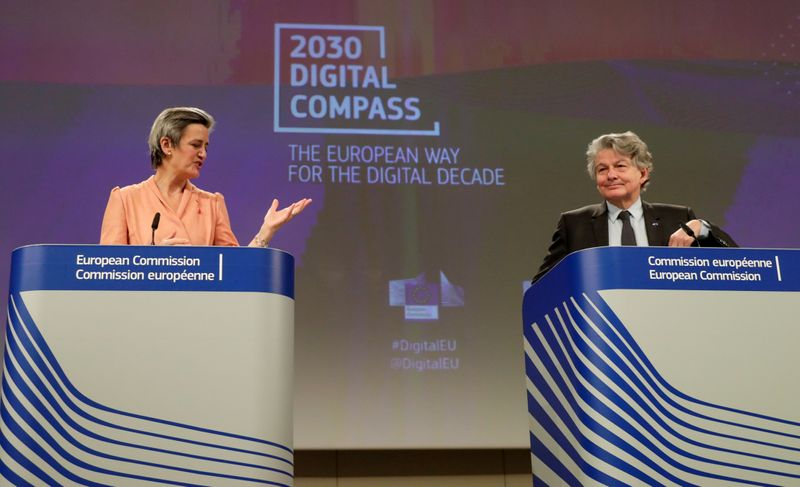 FILE PHOTO: Executive Vice President of the European Commission for A Europe Fit for the Digital Age Margrethe Vestager and European Commissioner for Internal Market Thierry Breton give a news conference on 2030 Digital Compass following weekly meeting of

BERLIN (Reuters) - Europe's ambition to make the most powerful computer chips risks wasting billions of euros, a German think tank said in a report on Thursday, urging policy makers to focus instead on rebuilding the region's chip design industry.

The EU executive's new goal of doubling its global semiconductor share by 2030 is doomed to fail because the bloc lacks a meaningful market that any super-advanced chip foundry could sell into, author Jan-Peter Kleinhans said.

"For an EU foundry there is simply no business case at the moment in Europe, mainly for the lack of customers," said Kleinhans, an analyst at the Stiftung Neue Verantwortung (SNV) think tank in Berlin.

The European Commission last month launched a 10-year plan, the Digital Compass, setting its sights on a 20% global semiconductor market share and building a fabrication plant, or fab, that can make superfast 2 nanometer chips.

The push has gained urgency due to supply-chain dislocations caused by a sharp recovery in demand for products ranging from smartphones to electric vehicles following a slump at the onset of the coronavirus pandemic a year ago.

The problem with the EU's strategy is that, unlike the United States and Asia, Europe lacks a meaningful chip design industry that could justify the cost of a mega-fab, Kleinhans told Reuters in an interview.

"In terms of volume it's simply not enough to fill a fab," he said. "That would mean an EU foundry would need to attract foreign customers - this is extremely unlikely."

Industry leaders TSMC and Samsung already plan investments in the United States to serve chip design leaders like Qualcomm or Nvidia that rely on contract manufacturers to produce their chips.

Plans by Intel to launch its own foundry service, or contract manufacturing operation, starting in the United States, would add to capacity and raise questions about the economics of expanding production in Europe, said Kleinhans.

Europe should instead focus on reviving its vestigial chip design industry, he said. Of its last two publicly listed "fabless" chipmakers one, Dialog, has just agreed to be bought for $6 billion by Japan's Renesas.

Apple's announcement that it will invest 1 billion euros ($1.2 billion) in a new chip design facility in Munich, Germany, shows where the EU should be focusing its efforts.

"Apple has single-handedly done more for European-based chip design than the Commission in the past 10 years," said Kleinhans.