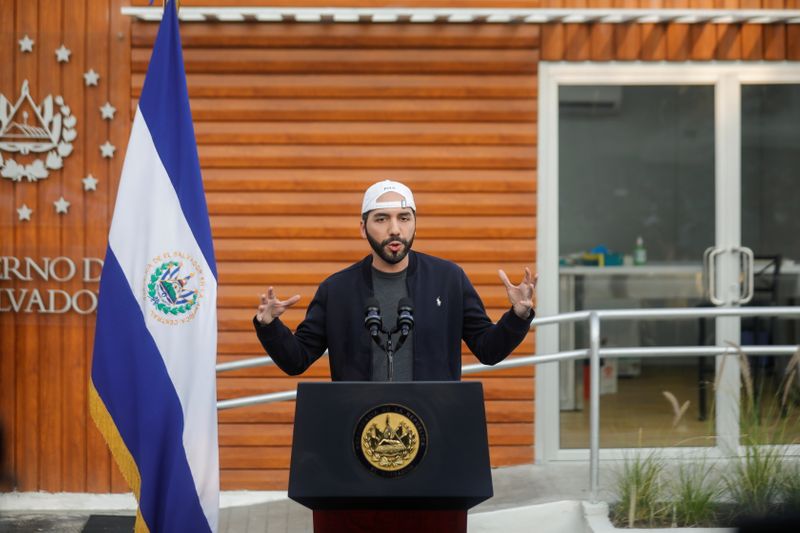 SAN SALVADOR (Reuters) -The release on Tuesday of a U.S. government list labeling 17 Central American politicians as corrupt prompted El Salvador's President Nayib Bukele to praise China, and its congress to ratify a 2019 cooperation agreement with the country.

The office of U.S. Representative Norma Torres, who had requested the report, released the U.S. State Department document. The report named a close aide of Bukele and his former security minister among those "credibly alleged" to have engaged in corrupt acts. Bukele himself was not named.

The list also includes Honduran and Guatemalan legislators and former officials from all three nations. The report said the list is based on "media reporting, credible information or allegations" of corruption, drug trafficking and using proceeds of crime to finance political campaigns.

After the release, Bukele said on Twitter the list was about "geopolitics" not fighting corruption. And he praised China's $500 million investment in public investments in El Salvador "without conditions," an apparent contrast to aid from Washington and U.S.-backed lenders that is conditioned on good governance.

The State Department did not immediately respond to a request for comment.

On Tuesday night, El Salvador's Congress ratified a cooperation agreement with China, which had been signed back in 2019. The agreement calls for 400 million Yuan - about $62 million - in investment in a water purification plant, a stadium, a library, and infrastructure along Salvador's coast.

Neither China's embassy in El Salvador nor El Salvador's foreign ministry responded to questions about the discrepancy in investment dollars.

U.S. officials see corruption as a major contributor to a migrant exodus from the region - along with poverty, gang violence and natural disasters. Washington wants to make sure a $4 billion aid package under consideration does not fall prey to graft.

Bukele recently removed top judges and the attorney general, which Washington considered to be unconstitutional. Widely popular Bukele, 39, says the move was justified by his large congressional majority.

El Salvador, which has a dollarized economy closely tied to the United States by trade and a large migrant population, is currently negotiating an over $1 billion loan from the International Monetary Fund, where Washington has a dominant voice.

The loan is likely to include clauses aimed at committing Bukele to democratic standards.

In contrast to Washington's activist posture, China's embassy in El Salvador responded to Bukele's control of the justice system by saying it would not interfere in sovereign matters.

China has in recent years made diplomatic inroads in Latin America, where it sources commodities and jostles for influence with the United States. During the pandemic, China has stepped into the gap left by Western countries and helped poorer nations obtain vaccines.

With Tuesday's vaccine shipment El Salvador will have received some 2.15 million COVID-19 vaccine doses from China for its 6.7 million people, according to the country's embassy in San Salvador.

Neighboring Honduras, which does not have diplomatic ties with China, has asked Bukele to share Chinese vaccines in the absence of supplies from the United States.