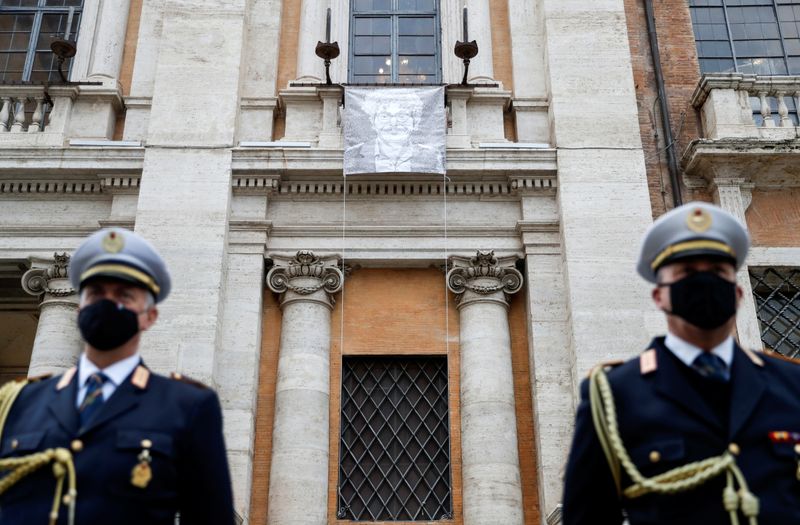 A banner depicting Patrick Zaki, an Egyptian researcher who was studying in Italy before he was detained and jailed in his home country, is seen on display on the facade of Rome's Capitol Hill, in Rome, Italy, January 25, 2021. REUTERS/Yara Nardi/Files

CAIRO (Reuters) - An Egyptian court ordered the release of jailed researcher Patrick Zaki on Tuesday, an Egyptian rights group and a judicial source said, and Italy's prime minister expressed satisfaction with the decision.

Zaki, an Egyptian graduate student at Italy's University of Bologna, was arrested in February 2020 during a visit to Egypt and accused of spreading false information over an article he wrote about the plight of Egypt's Christians.

Zaki's case has resonated in Italy, coming after the 2016 killing in Egypt of Italian graduate student Giulio Regeni shook relations between the two countries.

Arguments in the trial still need to be heard when it resumes, with the date set for Feb. 1, said Lobna Darwish of the Egyptian Initiative for Personal Rights (EIPR). "The judge just postponed and released him in the meantime," she said, adding that it was not immediately clear how quickly Zaki would be physically released.

Zaki was initially present at Tuesday's hearing in his hometown of Mansoura, north of Cairo, but was no longer in the room when the judge announced his decision, Darwish said.

Italian Prime Minister Mario Draghi expressed "satisfaction" in a statement from his office. "The issue has been and will be closely watched by the Italian government," it said.

Zaki also worked as a researcher at EIPR, an independent rights group in Egypt. He was held in pre-trial detention for more than a year and a half before his trial began in September.

EIPR says Zaki was beaten, subjected to electric shocks and threatened following his arrest. Egyptian authorities have not commented on the EIPR's assertions.

The authorities consistently deny allegations of ill treatment by the security forces and in places of detention.

There has been a far-reaching crackdown on political dissent in Egypt since then-army chief Abdel Fattah al-Sisi ousted President Mohamed Mursi of the Muslim Brotherhood in 2013. Rights groups say tens of thousands of people have been jailed, some under extended periods of pretrial detention.

Sisi, president since 2014, says security and stability are paramount and denies there are political prisoners in Egypt.