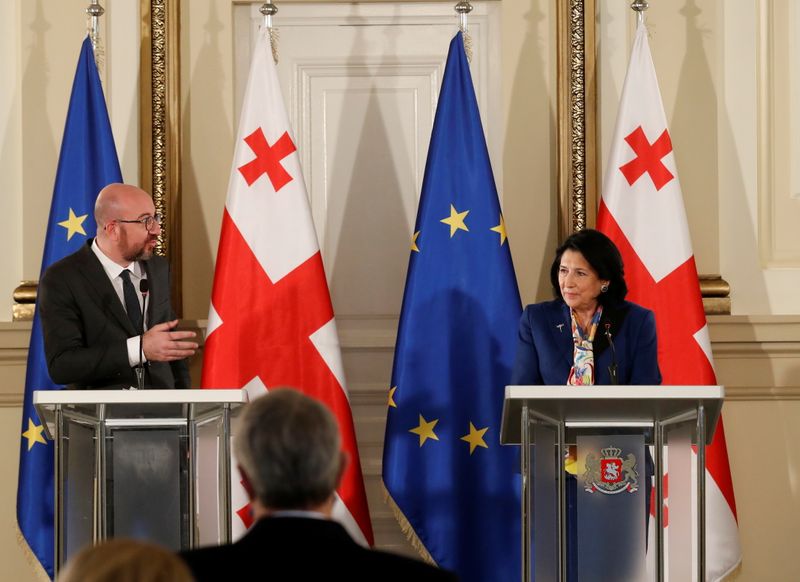 TBILISI (Reuters) - European Council President Charles Michel on Monday called on the Georgian government and opposition to defuse tension in a political crisis that has led to street protests and the resignation of the prime minister last month.

Georgian opposition supporters have taken to the streets in recent weeks to demand the release of opposition politician Nika Melia and call for fresh parliamentary elections after a contested vote last year.

On Monday, a small group of protesters marched to the residence of former prime minister Bidzina Ivanishvili, founder of the ruling Georgian Dream party, where they chanted and blared horns to call for a new parliamentary vote, according to the Sputnik Georgia news outlet.

"The European Union calls on all sides to intensify their efforts to de-escalate the situation and get together to find common ground," Michel said alongside Georgian President Salome Zourabichvili at a news conference in the capital Tbilisi.

Police last week detained Melia, chairman of the United National Movement (UNM) opposition party, after storming its offices and clashing with his supporters. Melia had been accused of inciting violence at street protests in June 2019, a charge he dismisses as politically motivated.

The case against Melia prompted Prime Minister Giorgi Gakharia to step down on Feb. 18 and warn that the opposition politician's detention could to exacerbate political rifts in the country of 3.7 million.

Georgian Dream won a parliamentary election in October last year, but the opposition said the vote was marred by violations and rejected its outcome.