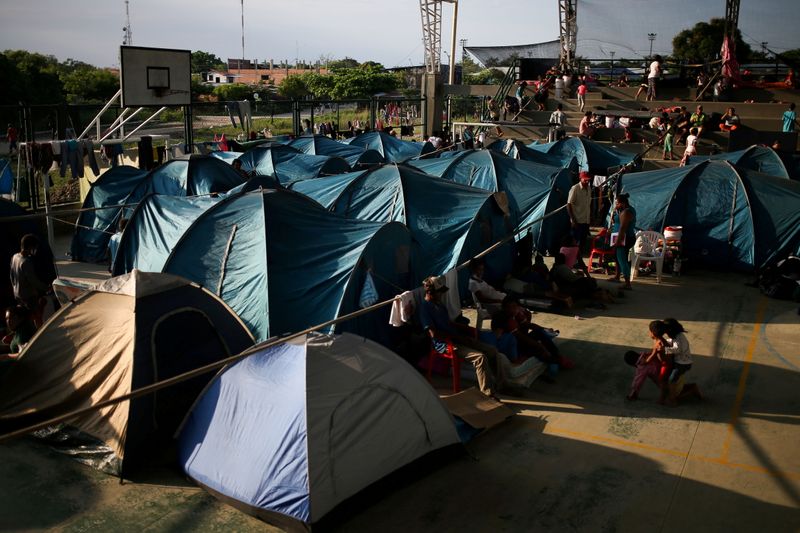 FILE PHOTO: Venezuelan migrants are seen inside a coliseum where a temporary camp has been set up, after fleeing their country due to military operations, according to the Colombian migration agency, in Arauquita, Colombia March 27, 2021. REUTERS/Luisa Go

ARAUQUITA MUNICIPALITY, Colombia (Reuters) - A dispute over control of drug trafficking between the Venezuelan military and illegal armed groups is behind the violence causing thousands of people to flee to Colombia, Colombian Defense Minister Diego Molano said on Sunday.

The flow of refugees began a week ago after Venezuela's National Bolivarian Armed Forces (FANB) launched an offensive against armed groups in La Victoria, a Venezuelan town in Apure state that is located across the Arauca River from Arauquita, Colombia.

"There's the (National Liberation Army), FARC dissidents, the Narcotalia, and of course the interest that the Bolivarian Armed Forces have in this drug trafficking business," Molano said in Arauquita, which sits on the border with Venezuela.

In 2016, Colombia signed a peace deal with the now demobilized Revolutionary Armed Forces of Colombia (FARC), ending the group's part in the country's more than 50-year conflict, which left 260,000 dead and millions displaced.

Maduro said during a broadcast on the coronavirus pandemic that Venezuela was a victim of irregular armed criminal groups from Colombia.

Hundreds of Venezuelans have been arriving in Colombia each day, worsening a humanitarian crisis spread across 18 makeshift shelters.

Colombian health authorities have detected four coronavirus infections in three of the shelters in Arauquita set up for the refugees, the mayor said earlier on Sunday.

While some 4,900 Venezuelan refugees have been registered in Arauquita so far, more are staying with friends and family, Etelivar Torres, mayor of Arauquita, told Reuters.

"We weren't prepared for something like this," Torres said.

Refugees have accused the Venezuelan military of rights abuses, including killing civilians and looting houses.