Donald Trump's niece blasts his 'chutzpah' toward her fraud lawsuit 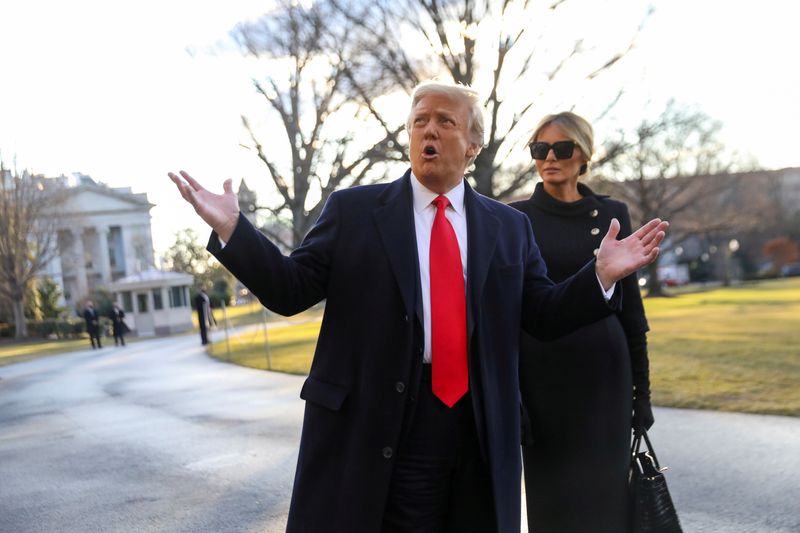 FILE PHOTO: U.S. President Donald Trump gestures as he and first lady Melania Trump depart the White House to board Marine One ahead of the inauguration of president-elect Joe Biden, in Washington, U.S., January 20, 2021. REUTERS/Leah Millis/

NEW YORK (Reuters) - Donald Trump's niece accused him on Friday of trying to dodge accountability for defrauding her out of a multimillion dollar inheritance by claiming she took too long to sue.

Lawyers for Mary Trump made the accusation in a New York state court in Manhattan, where the 55-year-old psychologist is suing the former president, his sister Maryanne Trump Barry and his late brother Robert's estate.

"The offensiveness of defendants' past conduct â stealing tens of millions of dollars from their own niece â is perhaps surpassed only by the chutzpah of their current arguments for dismissal," the lawyers wrote.

A lawyer for Donald Trump and Robert's estate could not immediately be reached outside business hours. Barry's lawyer declined to comment.

The case's origins are in the 1981 death of Mary's father, Fred Trump Jr, the older brother of Donald Trump, who left the then 16-year-old Mary a profitable real estate portfolio.

Mary Trump said her aunt and uncles were supposed to look after her interests but instead siphoned money away, and finally "squeezed" her out of the family fortune in a 2001 settlement related to the estate of Fred Trump Sr, who died in 1999.

She sued in September, just under two years after she claimed to learn what they did through a New York Times investigation into Donald Trump's finances.

"Reasonable diligence would not have uncovered the fraud" more than a decade earlier as the defendants contended, her lawyers wrote.

Mary Trump's best-selling tell-all "Too Much and Never Enough: How My Family Created the World's Most Dangerous Man" detailed some of her allegations.

Donald Trump's lawyers have accused Mary Trump of trying to cash in on the family name, and consume him with lawsuits.