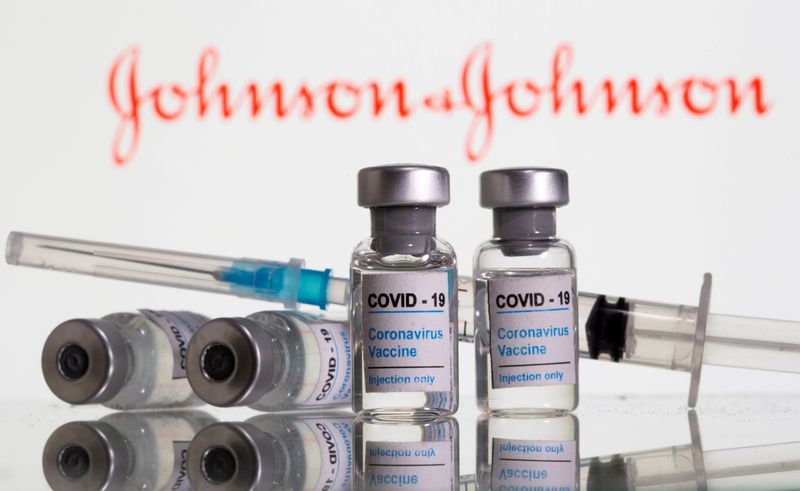 (Reuters) - Resuming the use of Johnson & Johnson's COVID-19 vaccine in the United States will require clear guidelines for the medical community on how to best treat patients that develop a rare type of blood clot, as well as alerting vaccine recipients to be aware of the telltale symptoms, according to heart doctors and other medical experts.

U.S. health regulators recommended last week that use of the J&J vaccine be paused after six cases of rare brain blood clots, accompanied by low platelet levels, were reported in women following vaccination, out of some 7 million people who have received the shot in the United States. A panel of expert advisors to U.S. health agencies will meet later this week to determine whether the pause should continue, with a decision expected as early as Friday.

"My estimate is that we will continue to use it in some form," Dr. Anthony Fauci, chief medical advisor to President Joe Biden, said Sunday on NBC's "Meet the Press." "I do think that there will likely be some sort of warning or restriction or risk assessment."

Scientists have yet to establish a direct link between the J&J vaccine and the unusual blood clots, which have also been identified among a tiny fraction of people who received AstraZeneca Plc's COVID-19 vaccine outside of the United States. It is not clear how long it would take to determine whether the vaccines cause such symptoms.

In the meantime, however, scientists say that both vaccines remain important tools to help combat a coronavirus pandemic that has killed more than 3 million people globally. The key will be communicating to doctors and patients how to look out for a "one-in-a-million" side effect.

"It made sense to pause it," said Dr. Rishi Mehta, associate medical director of inpatient operations at Keck Hospital at the University of Southern California in Los Angeles, referring to use of the J&J vaccine. "We should say: 'Listen, the side effects are rare, but there is a potential for you to get them and these are what you should look out for... We are talking about headaches, abdominal pain, confusion."

The American Heart Association on Friday said other potential symptoms, which could occur up to two weeks after vaccination, are blurry vision, fainting, sensory changes, seizures, leg pain or shortness of breath.

Doctors will also need to be vigilant when it comes to treatment. Cases identified so far are of cerebral venous sinus thrombosis (CVST), or blood clots in the brain's veins, rather than in the arteries, which is the case for most strokes.

The U.S. Food and Drug Administration has said patients who exhibit clot-related symptoms after receiving the J&J vaccine should not be given heparin, a blood thinner that is widely used to treat clotting disorders, at least until additional testing to determine whether they have low platelet counts. The rare combination of clotting and low platelets signals a condition called heparin-associated thrombocytopenia, and giving heparin can cause harm.

The FDA warned healthcare providers that use of heparin in these cases could even be fatal and advised them to strongly consider non-heparin anticoagulants and high-dose intravenous immune globulin (IVIG) instead.

"You would need to do a few tests with anyone who has symptoms like this, and based on those tests, you would be reasonably positioned to treat without putting the person at risk," Dr. Jeffrey Berger, a cardiologist focused on blood clotting disease at New York University.

According to details published in the New England Journal of Medicine on Friday, a 48-year-old woman who had the J&J shot was transferred to the University of Nebraska Medical Center after being diagnosed with extensive blood clotting, or thrombosis. She was treated with heparin, but her condition worsened and she was switched to a different anticoagulant and IVIG. The patient remained critically ill at the time of the report. (https://bit.ly/3doTsYH)

"If they give heparin they can make matters worse, so that's a good reason to call the attention to this," Fauci, director of the National Institute for Allergy and Infectious Diseases, told Reuters.

Doctors said the pause in J&J vaccinations allows time for hospital systems to update their own recommendations.

"It's certainly a very serious condition, but there are recommendations for treatment," said Dr. Annabelle de St. Maurice, infectious disease specialist, University of California at Los Angeles. "Prior to this, someone who had the vaccine and had a headache, our first idea wouldn't be to consider CVST and order the labs and imaging to assess that."

Officials at J&J and AstraZeneca did not immediately respond to requests for comment.