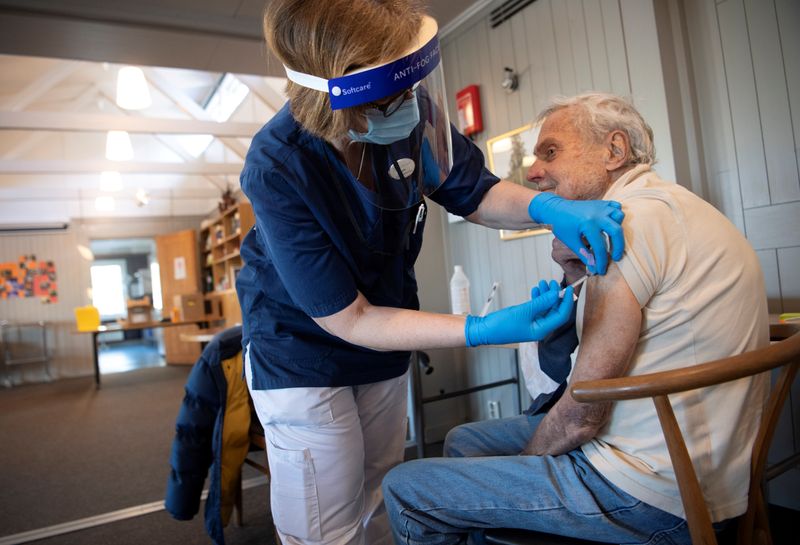 STOCKHOLM (Reuters) - Thousands of vaccination slots in Stockholm earmarked for Sweden's oldest and frailest people are being passed on to younger patients, with critics accusing the region of failing to adapt the process for those not used to digital technology.

In the capital region, home to about 2.3 million of the country's 10.3 million inhabitants, vaccinations are falling behind. So far 15.9% of the population over 18 in Stockholm have received at least one shot, compared with 20.4% for the country as a whole.

Vaccinations are primarily handled by the health clinics at which people are registered, but to speed up, the region has opened 10 vaccination centres. However, on Wednesday 8,000 of the 15,000 slots at the centres were vacant.

To book a shot at the centres, patients need a digital identification app, widely used by tech-savvy young and middle-aged Swedes, but less by the elderly. With older patients unable to book the slots, the region has instead opened up for younger patients.

"They have failed completely on so many levels," Peter Sikstrom, head of the Swedish Pensioners' Association, said. "Our members are so angry and disappointed, especially when they see how much better it is going in the rest of Sweden."

Sikstrom said information had been slow and primarily sent out online, and so was often missed by Stockholmers aged 65 and above who are currently eligible for shots. He urged authorities to allow other options than digital IDs for bookings at vaccination centres.

"Stockholm is a big and complex region. We have really done everything we can to get our message across", he said. "One can always do better, but we think we have done a lot."