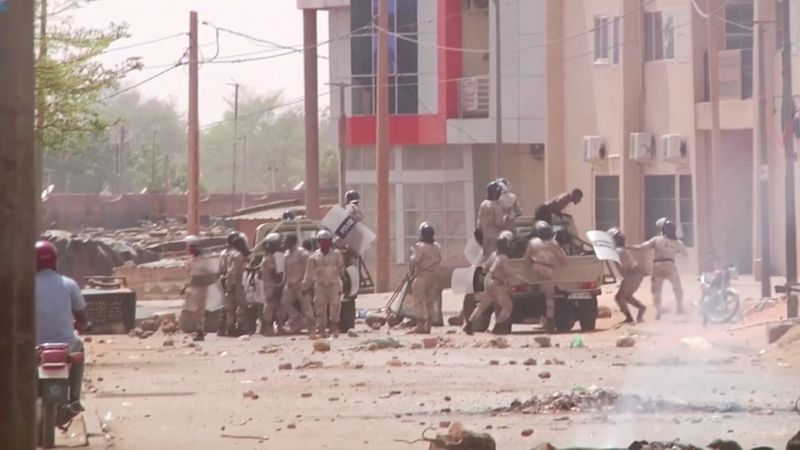 FILE PHOTO: A protester tries to escape from a riot police vehicle after being detained, a day after opposition presidential candidate Mahamane Ousmane rejected election results that gave his opponent Mohamed Bazoum a majority of the votes, in Niamey, Nig

NIAMEY (Reuters) - Supporters of the losing presidential candidate in Niger set several buildings on fire, burnt tyres and threw rocks at the police on Thursday, as the authorities announced that two people had been killed in post-election protests this week.

The national electoral commission on Tuesday declared ruling party candidate Mohamed Bazoum the winner of Sunday's runoff election with 55.75% of the vote, but his rival, Mahamane Ousmane, a former president, has alleged fraud and claimed he won with 50.3%.

Since then, two people have been killed and 468 detained during protests by Ousmane's supporters in the capital Niamey, Interior Minister Alkache Alhada said.

"They want to wreak havoc," Alhada said at a news conference, blaming opposition leader Hama Amadou for the violence.

There was no immediate response from Amadou, who finished runner-up in the 2016 election. He was barred from running this time because of a criminal conviction and threw his support behind Ousmane.

The election is meant to lead to the first transition from one democratically elected leader to another following four coups since independence from France in 1960. President Mahamadou Issoufou is stepping down after two five-year terms.

On Thursday, small groups of Ousmane supporters took to the streets again to lob rocks at police and national guard troops, who responded by firing tear gas. Internet access has also been severely limited since Wednesday.

Some protesters set private houses on fire, including that of Radio France Internationale (RFI) correspondent Moussa Kaka, a Reuters witness said. RFI said in a statement that Kaka and his family were safe.

Ousmane, who served as president from 1993 until 1996, when he was overthrown by the military, said on Wednesday that he reserved the right to appeal the election result.

An observer mission from the Economic Community of West African States said the vote was held "under free, fair, credible and transparent conditions".

However, it was marred by two attacks that killed eight election workers in parts of Niger where Islamist militants regularly target civilians and the military.