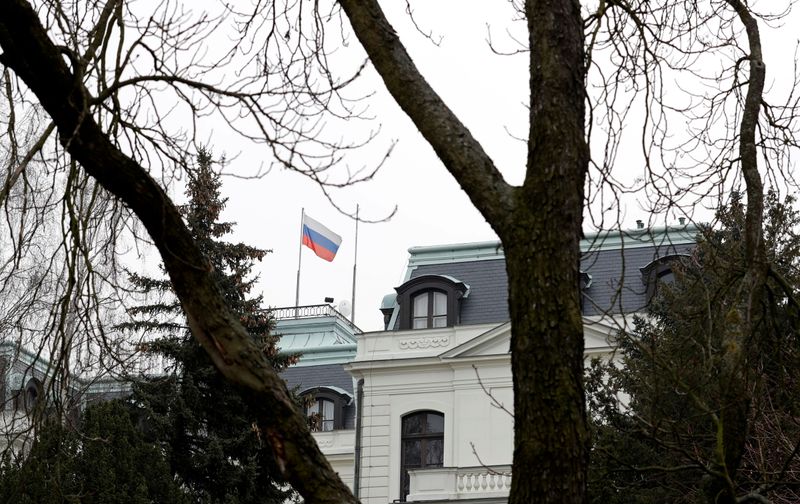 PRAGUE (Reuters) - The Czech Republic is expelling 18 Russian diplomats over suspicions that Russian intelligence services were involved in an ammunition depot explosion in 2014, its government said on Saturday.

The central European country is a NATO and EU member state, and the expulsions and allegations have triggered its biggest row with Russia since the end of the communist era in 1989.

Czech Prime Minister Andrej Babis said in a briefing shown live on television that there was "well-grounded suspicion about the involvement of officers of the Russian intelligence service GRU... in the explosion of an ammunitions depot in the Vrbetice area."

Several explosions shook the Vrbetice depot, 330 km (205 miles) southeast of Prague, in October 2014, killing two employees of a private company that was renting the site from a state military organisation.

Babis called the circumstances "unprecedented and scandalous", while a Russian lawmaker cited by Interfax described his allegation as absurd.

The U.S. embassy in Prague said on Twitter that Washington "stands with its steadfast ally, the Czech Republic. We appreciate their significant action to impose costs on Russia for its dangerous actions on Czech soil."

Hamacek drew a parallel with the poisoning of Russian spy Sergei Skripal in Britain in 2018, and Czech police said separately they were searching for two men carrying Russian passports in connection with serious criminal activity in the names of Alexander Petrov and Ruslan Boshirov.

Those were the aliases used by two Russian military intelligence officers who British prosecutors charged with Skripal's attempted murder. They and Moscow both denied involvement.

Hamacek said he had "decided to expel all personnel at the Russian embassy in Prague who were clearly identified by our secret services as officers of Russia's secret services, SVR and GRU."

Skripal and his daughter Yulia were poisoned with a nerve agent in the English city of Salisbury in March 2018.

The attack prompted the biggest wave of diplomatic expulsions between Moscow and the West since the Cold War.

Czech police said Petrov and Boshirov, whose whose birth names British government documents have given as Alexander Mishkin and Anatoly Chepigas, had also used a Moldovan passport in the name of Nicolai Popa and a Tajik one issued in the name of Ruslan Tabarov.

Police said both men were believed to have been in the Czech Republic from Oct. 11 until Oct. 16, 2014, the day of the explosion. They were first in Prague and later in the eastern regions, which is where the depot is based.

Russia would not extradite them, Interfax said, citing an unnamed source.

"Russia's main law prohibits the extradition to a foreign state of Russian citizens accused of committing a crime on the territory of a foreign state," the source was quoted as saying.

The New York Times reported in 2019 that 29155 was an elite unit inside the Russian intelligence system skilled in subversion, sabotage and assassination.