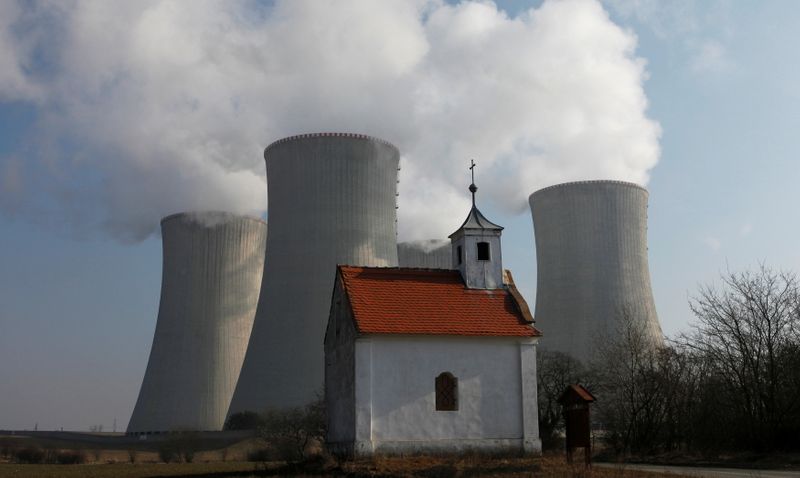 FILE PHOTO: A chapel is seen in front of the cooling towers of the Czech nuclear power plant at Dukovany, 125 miles (200 kilometers) east from Prague, March 15, 2011. REUTERS/Petr Josek/File Photo

PRAGUE (Reuters) - The Czech Republic's security row with Russia could influence a decision on whether Russia is invited to bid on building a new unit at the Dukovany nuclear power plant, Industry Minister Karel Havlicek told Reuters on Saturday.

The Czech Republic is expelling 18 Russian diplomats over suspicions that Russian intelligence services were involved in an ammunition depot explosion in 2014.

The expulsions come as the central European country looks to start a tender for the construction of a new block at majority state-owned CEZ's Dukovany plant, with the question of inviting a Russian bidder having already split lawmakers.

"These events of course can affect Dukovany (tender). It is very serious news, any such act, should it be confirmed, must clearly have consequences," Havlicek said in a text message when asked about the expulsions.

Havlicek has been among those advocating for as many bidders in the nuclear tender as possible, including from Russia, to boost competitiveness.

Czech security services, though, have warned for years about the risks they say are posed by Russia and China. Opposition politicians have backed those views.

Earlier this year, political parties agreed on excluding Chinese bidders from the Dukovany tender while not agreeing on Russian firms.

The tender, estimated to be worth at least 6 billion euros, is the European Union and NATO country's largest single investment.

The Industry Ministry has started a pre-qualification round, set as a security assessment for potential bidders, before the official launch of the tender that is expected toward the end of 2021, after a new government takes office following a general election in October.