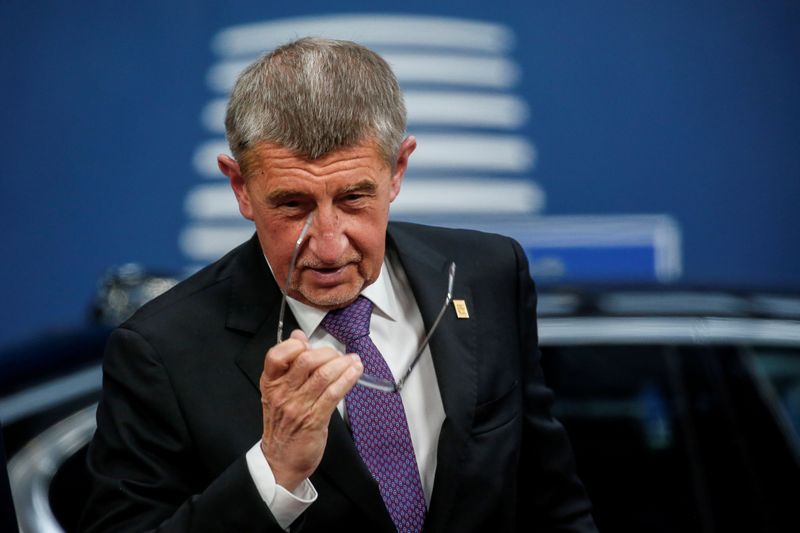 By Robert Muller and Jason Hovet

PRAGUE (Reuters) - The Czech government announced on Friday strict new restrictions limiting people's movement over the next three weeks and tightening shop and school closures in a bid to slow a fast spread of COVID-19 infections.

The country of 10.7 million, in which around one in 10 have been infected in the past year, has the highest per capita infection rate in the world over the past week, according to the Our World in Data website, 10 times higher than Germany. The death toll has risen to 20,000 from about 600 in five months.

The country is facing a renewed surge in infections, accelerated by the British variant. The number of patients in serious condition is a record. Some hospitals have been forced to transfer patients hundreds of miles away due to capacity.

Prime Minister Andrej Babis said he wanted to avoid scenes seen from Bergamo in northern Italy, which was Europe's epicenter at the outset of the pandemic last year and whose overwhelmed hospitals shocked the world.

"I understand it is a great burden for everyone, we are not happy about it. But if we don't do (anything), the whole world will see Bergamo" in the Czech Republic, Babis said.

The new restrictions, effective from Monday, will limit people's movement only to home districts, except for essential trips.

The government also reduced the list of essential shops, closing, for example, stationery stores or those selling children's shoes and clothing. It adds to non-essential retail shops, restaurants, most services, gyms and entertainment venues that have been almost continuously closed since October.

Pre-schools will shut and first- and second-graders will shift to online schooling like other students.

** For an interactive graphic: https://tmsnrt.rs/3bFHw2R

Babis, a billionaire businessman before entering politics, has seen his popularity hit by the pandemic and a slow vaccine rollout but has urged people to limit contact amid growing lockdown fatigue.

The country managed relatively well compared to some in Europe early in the pandemic, when city streets were largely deserted amid restrictions. Some factories idled, causing a massive economic hit.

Industry was not touched in these measures although firms will be asked to test workers and provide respirator masks.

Health Minister Jan Blatny said daily infections would rise above recent highs of 18,000 in the coming one or two weeks and would not fall without tighter measures.

The limits on movement are possible after the government called a new state of emergency effective Saturday for 30 days.