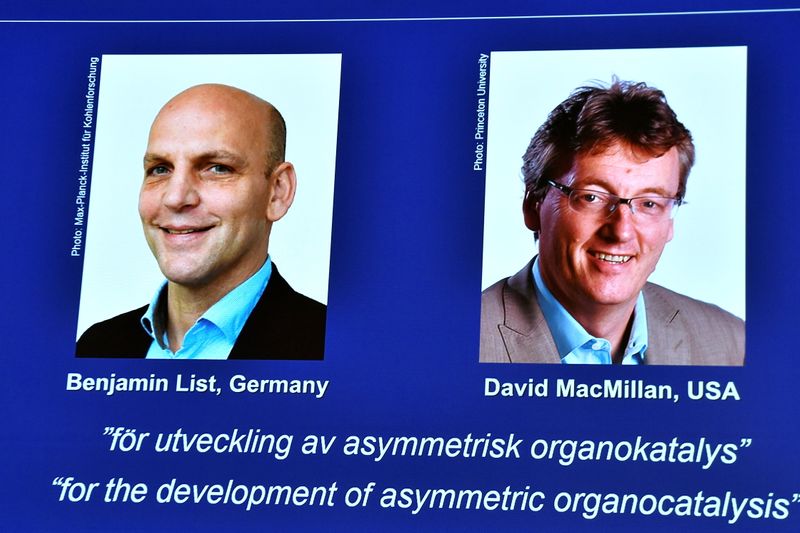 Their work on asymmetric organocatalysis, which the award-giving body described as "a new and ingenious tool for molecule building", has also helped in the development of plastics, perfumes and flavours.

"Organic catalysts can be used to drive multitudes of chemical reactions," the Royal Swedish Academy of Sciences said. "Using these reactions, researchers can now more efficiently construct anything from new pharmaceuticals to molecules that can capture light in solar cells."

Catalysts are molecules that remain stable while enabling or speeding up chemical reactions performed in labs or large industrial reactors. Before the laureates' breakthrough findings at the turn of the millennium, only certain metals and complex enzymes were known to do the trick.

The academy said the new generation of small-molecule catalysts were more friendly for the environment and cheaper to produce, and praised the precision of the new tools.

Before asymmetric catalysis, man-made catalysed substances would often contain not only the desired molecule but also its unwanted mirror image. The sedative thalidomide, which caused deformities in human embryos around six decades ago, was a catastrophic example, it said.

"The fact is, it is estimated that 35 per cent of the worldâs total GDP in some way involves chemical catalysis," it added.

List, 53, said the academy caught up with him while on vacation in Amsterdam with his wife, who in the past had liked to joke that somebody might be calling him from Sweden.

"But today we didnât even make the joke and certainly didnât anticipate this - and then Sweden appears on my phone... it was a very special moment that I will never forget," he said, dialling into the media briefing announcing the winners.

List, 53, is director of the Max-Planck-Institut fuer Kohlenforschung, Muelheim an der Ruhr, Germany.

He said he did not initially know that MacMillan was working on the same subject and figured his hunch might just be a "stupid idea" until it worked.

He and MacMillan share the prestigious 10-million Swedish crown ($1.14-million) prize in equal parts for breakthroughs achieved independently of one another.

MacMillan, 53, who said he was only the second person in his western Scotland working class family to go to college, noted that it was often challenging for chemists to explain the significance of their work to the outside world.

"But the one thing I will say is that everything we do, or what a chemist does, impacts everything that's around us all the time," he told a briefing at Princeton University, where he is a professor.

The impact of his students' work can be almost immediate, said MacMillan, who has dual U.S. and UK citizenship.

"They are literally doing experiments on a Tuesday, they discover something -- we have discussions with major pharmaceutical companies all the time and they learn about what we are doing -- and they literally employ it on a Friday," he said.

Reflecting on the Nobel Prize, he said: "It's one of those weird moments in life when you have to sit about and think about all the people who got you here, and (it) makes you very sentimental."

Some scientists had suggested the rapid development of mRNA (Messenger ribonucleic acid) COVID-19 vaccines would be recognised this year, also possibly in the medicine category, which was awarded for discoveries on the sense of touch.

"This is an extremely important topic weâre thinking about, but there will be more years, more Nobel prizes," said Pernilla Wittung Stafshede of the Swedish Academy of Sciences.

The prizes, for achievements in science, literature and peace, were created and funded in the will of Swedish dynamite inventor and businessman Alfred Nobel. They have been awarded since 1901, with the economics prize first handed out in 1969.