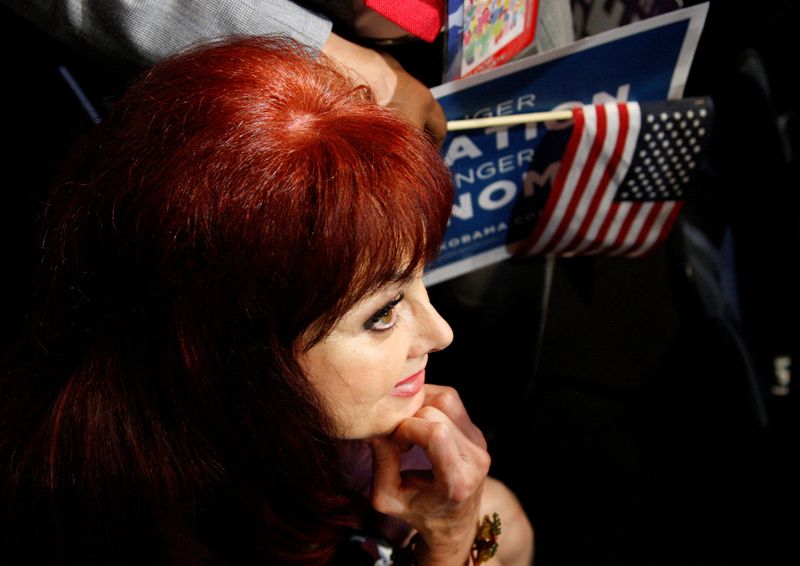 FILE PHOTO: Country music star Naomi Judd listens as her daughter Ashley (not shown) reads off the Tennessee vote totals during the roll call vote during the second session of the Democratic National Convention in Charlotte, North Carolina, September 5, 2

(Reuters) - Naomi Judd, matriarch of the country music duo the Judds, died of a self-inflicted gunshot wound a day before being inducted into the Country Music Hall of Fame, her family said on Thursday.

Judd, 76, suffered from mental illness, a disease that tells victims "you are not loved, you are not enough, that you are not worthy," her daughter Ashley Judd said in an interview aired on ABC's "Good Morning America."

"Our mother couldn't hang on until she was inducted into the Hall of Fame by her peers. That was the level of disaster that was going on inside of her," Ashley Judd, a 54-year-old actor, said.

"She used a weapon. Mother used a firearm," she said of the death, which was announced on April 30.

Ashley Judd said she was disclosing the cause of death in a televised interview to maintain "control" over the information before it became public, possibly through leaks about Judd's autopsy.

The family's revelation followed news that the rate of U.S. gun deaths surged during the pandemic to the highest point since 1994. Gun suicides - the leading cause of gun deaths - totaled 24,245 in 2020, the U.S. Centers for Disease Control and Prevention said in a report published on Tuesday.

Naomi and her daughter Wynonna Judd, 57, made up The Judds, the singing, guitar-playing duo inducted into the Country Music Hall of Fame on May 1.

"I have both grief and trauma" from discovering the body, Ashley Judd said.

The family urged anyone having suicidal thoughts to reach out for help by calling the National Suicide Prevention Lifeline at 800-273-8255.