Coronavirus surge could be worse than the last for the Americas: PAHO 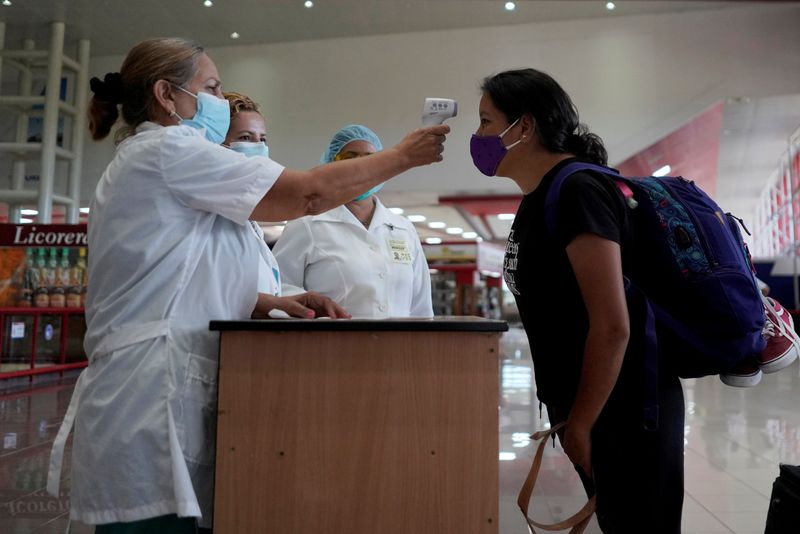 FILE PHOTO: A traveller has her temperature checked at the Jose Marti International Airport amid concerns about the spread of the coronavirus disease (COVID-19), in Havana, Cuba, November 15, 2020. REUTERS/Alexandre Meneghini

By Aislinn Laing and Marion Giraldo

Director Carissa Etienne said the end of the Southern Hemisphere summer, following holidays where people grouped together and spread cases, had prompted spikes. She urged citizens to stay at home and governments to think hard before lowering movement restrictions.

So far this year, over 19.7 million COVID cases and 475,000 related deaths have been reported in the Americas, she said.

More have begun to arrive through the COVAX vaccines alliance, a total of 2.5 million in the past 30 days, with all countries in the region to receive some COVAX doses in the next week, according to PAHO assistant director Jarbas Barbosa.

Vaccine supply "continues to be our greatest challenge," admitted Etienne, saying the organisation was "scouring" the globe for more supply, asking countries to hand over surpluses.

There have been "far too many examples" of vaccine nationalism, she said.

"The current system is hard-wired for inequity and that is not acceptable," Etienne said.

At present Brazil, Peru, Chile, and Paraguay are reporting the highest COVID-related death rates, and the recent influx in cases is overwhelming hospitals, PAHO said.

At least one of the three COVID "variants of concern" have been identified in 32 regional countries, with Brazil's P1 in Argentina, Chile, Uruguay, Colombia, Venezuela, Peru, the United States, Canada and Mexico.

PAHO is still studying variants' impact, it said, but the incident manager Dr Sylvain Aldighieri noted reports from Brazil that young adults were filling hospital intensive care in higher numbers than in 2020.

The P1 variant is "clearly contributing" to the spread of cases in Brazil, he added.