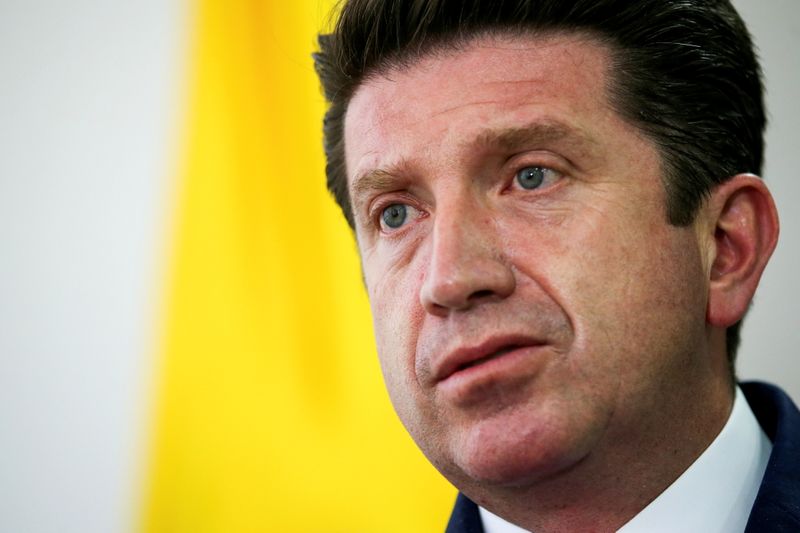 BOGOTA (Reuters) - Fighting drug trafficking and dismantling armed groups are the top challenges for Colombia's military in 2021, the country's new defense minister said on Thursday, adding he is confident violence against human rights activists can be reduced.

Colombia could restart aerial fumigation of coca - the base ingredient in cocaine - with herbicide glyphosate as early as next month, Defense Minister Diego Molano told Reuters in an interview.

Though the FARC rebel group disarmed under a 2016 peace deal, still-active guerrillas from the National Liberation Army (ELN), crime gangs and former FARC fighters who reject the accord continue to battle over lucrative illegal mining and drug trafficking territory.

"What we want is security, security, more security," said Molano. "First, the head-on fight against drug trafficking, which is the biggest threat we have in Colombia to the stability of our democracy."

Molano, who took over as defense minister on Feb. 2 after his predecessor died of COVID-19, said the government would look to capture the leaders of armed groups with an increase in military and intelligence operations.

"Disassembling these groups, capturing their leaders and succeeding at diminishing these structures" is a priority.

Colombia has repeatedly accused Nicolas Maduro, the president of neighboring Venezuela, of allowing the ELN and former members of the Revolutionary Armed Forces of Colombia (FARC) to operate from his country. Maduro has denied the claims.

Molano said Colombia will not conduct operations in other countries to pursue kingpins, and will need international cooperation to capture targets.

The arrest or death of major criminal leaders is part of the effort to curb mass killings and murders of human rights activists, which have sparked international criticism against Colombian President Ivan Duque. [nL1N2KF3EL]

Molano did not give details about recent promises by Duque to increase military operations to reduce the murders.

Aerial fumigation with glyphosate - suspended in 2015 on concerns it could potentially cause cancer - will restart as soon as the government gets judicial approval, Molano said.

"As soon as the procedure is finished, which we expect at the end of March, we'll start," he said.