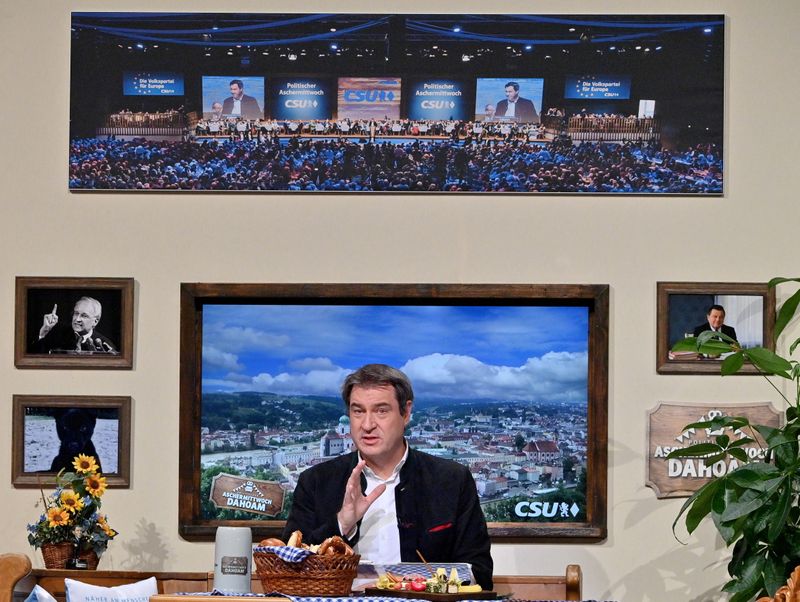 BERLIN (Reuters) - The German Greens' policy platform is not currently suitable for a coalition with the CDU/CSU conservative alliance, the leader of the Bavarian Christian Social Union (CSU) said on Wednesday, adding that the smaller liberals would be a better partner.

Markus Soeder, a potential CDU/CSU chancellor candidate in September's national election, was responding to comments by a prominent Greens politician who took aim at detached family homes and urged municipalities to back more economical housing.

"This is actually the typical left-wing face of the Greens, we don't really want that," Soeder told a traditional 'political Ash Wednesday' virtual gathering of the CSU.

Soeder's remarks are significant because a coalition of the CDU/CSU "Union" and the Greens has looked likely after the federal election given Germany's fractured electoral landscape that points to few, if any, other options.

The new leader of Angela Merkel's Christian Democrats (CDU), Armin Laschet, is in pole position to succeed her as chancellor.

However, Soeder has called for the CDU/CSU alliance to decide on its chancellor candidate only after state elections in mid-March, leaving open the possibility he could run if Laschet stumbles.

Merkel, who has led Germany since 2005, is due to step down before the election.

An INSA poll on Monday put support for the Union at 33.5%, and the Greens on 17%. The Social Democrats, who now share power with the CDU/CSU but do not want to do so again, were also on 17% and the business-friendly Free Democrats (FDP) on 9%.

Greens co-leader Robert Habeck on Monday countered accusations from other parties that his party wanted a blanket ban on so-called 'single-family homes', saying these were "part of the ensemble of housing options in Germany".

Soeder told the CSU meeting that a coalition with the Greens would be possible but "not easy", adding: "The current programme they have is not suitable for a coalition."

"The FDP would always be the priority partner if there is enough (support for them)," Soeder said, adding that he and Laschet would nonetheless strive for an absolute majority for the CDU/CSU.