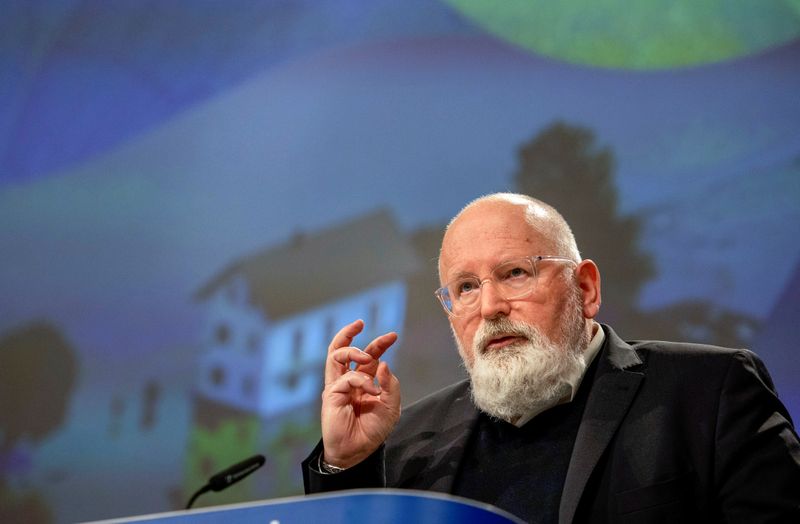 BRUSSELS (Reuters) - The European Commission on Thursday urged negotiators to finish the EU's landmark climate law in time for an international summit next month, saying the legislation would support Europe's bid to lead the world in fighting climate change.

The EU's climate law will formalise its goal to have zero net greenhouse gas emissions by 2050, and a 2030 target to cut emissions faster than previously planned.

But more than a year on from the Commission's proposal of the bill, negotiators representing EU governments, the European Parliament and the Commission, still have not finished its contents.

EU climate policy chief Frans Timmermans on Thursday called on them to finalise the law by a climate leaders' summit on April 22, organised by the U.S. government.

"We want to show the world that the EU leads on global climate action," Timmermans told a virtual meeting of EU environment ministers, parts of which were publicly broadcast.

Hitting that deadline "is extremely important if Europe wants to maintain its leadership role and wants to invite the rest of the world to follow," he said.

The United States is due to announce its own target to cut CO2 this decade at the summit.

Brussels also wants a swift conclusion of the law because it will influence an EU climate policy package due in June. The proposals will include tougher EU car CO2 standards, a revamp of the bloc's carbon market and new renewable energy goals - all with the aim of meeting a new 2030 emissions target.

What that target will be depends on the climate law. The Commission and EU member states want to slash net emissions at least 55% by 2030 from 1990 levels. The European Parliament wants a 60% cut.

Negotiations have edged towards agreeing parts of the law - including a budget-like mechanism to monitor future emissions. But negotiators have not yet tackled the 2030 target, meaning the toughest talks likely lie ahead.

EU officials said two further negotiation rounds are likely needed to finish the law, with the next scheduled for March 26.