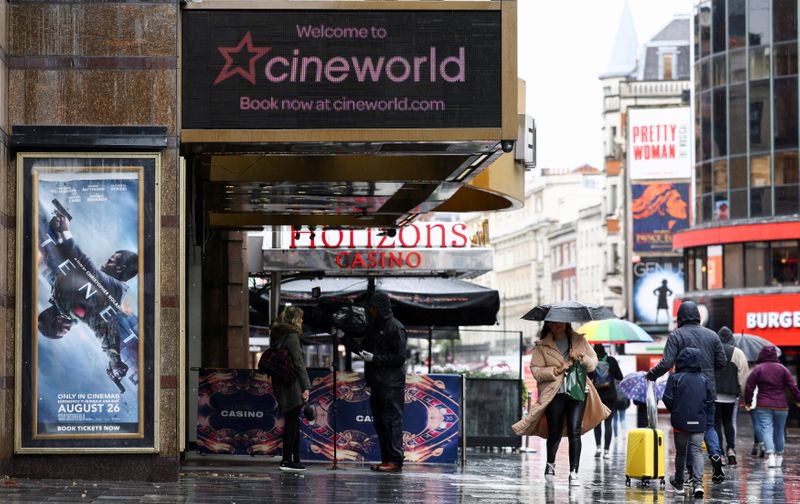 By Muvija M and Chris Peters

(Reuters) - U.S. cinema chain Regal will reopen next month in time for big-budget release "Godzilla vs. Kong", owner Cineworld said on Tuesday, as it set out a deal to show Warner Bros films before they are made available for home streaming from 2022.

AT&T-owned Warner Bros said in December that for 2021 it would release films at the same time to theatres and on its streaming service HBO Max.

Cineworld shares were down 7% at 1100 GMT, however, with analysts noting the Warner Bros deal was still just half of the traditional 90-day exclusivity enjoyed by cinemas.

The deal is the latest sign of how cinemas and flourishing streaming platforms might co-exist in a post-pandemic world.

U.S.-listed Cinemark signed a deal in November to allow Comcast-owned Universal Pictures to offer its movies to U.S. homes as soon as 17 days after their theatre debut, while Universal has a similar agreement with AMC.

With theatre capacity limits rising to 50% or more across most U.S. states, Cineworld will be able to operate profitably, Greidinger said.

However, brokerage Peel Hunt predicted a bumpy ride for cinemas.

"We expect leisure consumers will prioritise social activities over high-frequency cinema attendance," it said, cutting its rating on Cineworld stock to 'hold' from 'buy'.

Cineworld, which closed most of its nearly 800 sites last October, temporarily affecting 45,000 jobs, plans to reopen its UK cinemas in May, in line with government guidelines.

Analysts on average expect the company to post a $1.29 billion loss for 2020, when it reports results on Thursday, according to per Eikon data. It made a profit of $220.2 million in 2019.