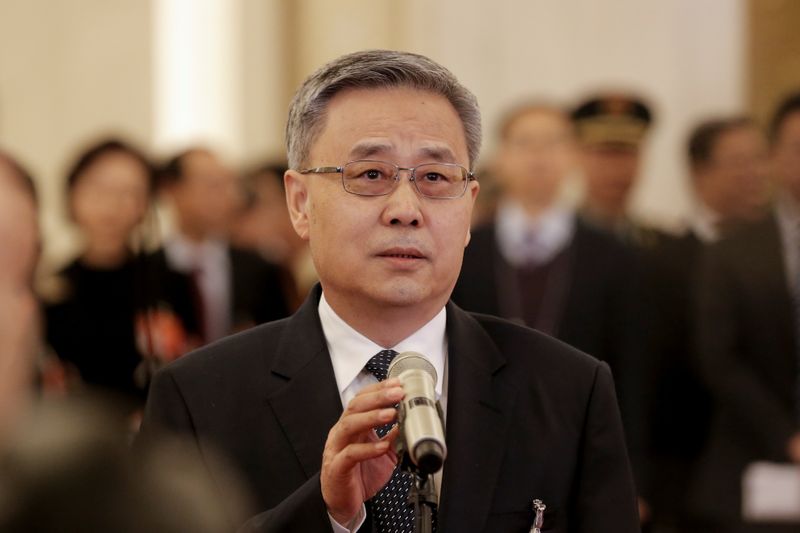 FILE PHOTO: China's top banking regulator Guo Shuqing speaks to reporters on the sidelines of the National People's Congress (NPC) at the Great Hall of the People in Beijing, China, March 5, 2019. REUTERS/Thomas Peter

Micro lenders, consumer finance firms and banks operated by internet platforms should all have adequate capital like other financial institutions, Guo said at a news conference.

Chinese financial regulators have rolled out a slew of measures since last year to tighten the oversight of online lending practices in the country, particularly of technology firms looking to expand into the financial space, moving away from its once laissez-faire approach.

"Starting a business needs capital, so does starting a financial business," Guo said.

"As long as internet platforms conduct financial operations, the requirement of capital adequacy ratio on them should be the same as financial institutions."

Financial regulators have set various grace periods for different internet platforms, according to Guo. Some have until the end of 2020 and others until the middle of 2021 to meet capital adequacy requirements, he said.

"But by a maximum of two years, (the capital adequacy of) all platforms should be back on track," Guo added.

With regards to Ant Group's restructuring, Guo said there were no restrictions on the financial business it develops but that all of its financial activities should to be regulated by laws.

Ant Group is in talks with other shareholders in its new consumer finance unit to bolster the firm's capital as the fintech giant prepares to fold in its lucrative micro-lending businesses, Reuters reported last week.

It would need an additional capital of 30 billion yuan ($4.64 billion) to meet regulatory requirements, according to the report.