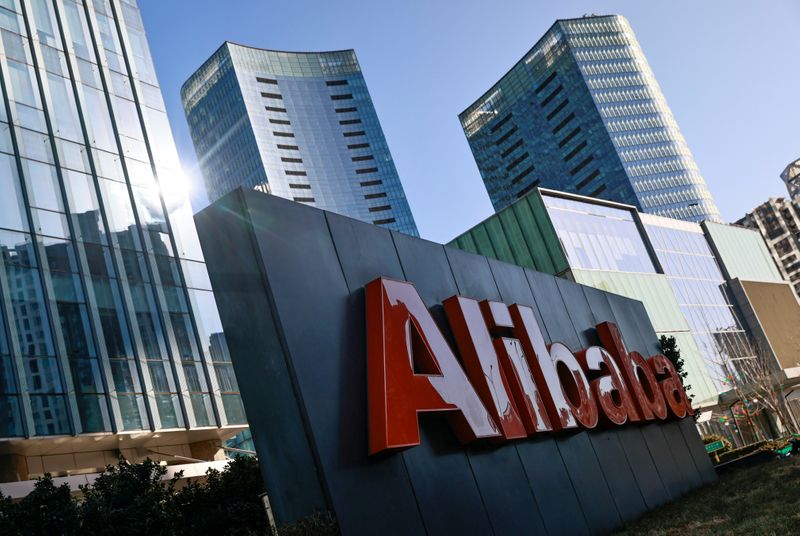 FILE PHOTO: The logo of Alibaba Group is seen at its office in Beijing, China January 5, 2021. REUTERS/Thomas Peter/File Photo

BEIJING/HONG KONG (Reuters) - China's competition watchdog is adding staff and other resources as it ramps up efforts to crack down on anti-competitive behaviour, especially among the country's powerful companies, people with knowledge of the matter told Reuters.

Beijing's plan to bulk up the State Administration for Market Regulation (SAMR) comes as China revamps its competition law with proposed amendments including a sharp increase in fines and expanded criteria for judging a company's control of a market.

On Saturday, the watchdog slapped a record $2.75 billion fine on Alibaba after an antimonopoly probe found the e-commerce giant had abused its dominant market position for several years.

The fine underscores the challenges ahead for companies, including global firms with operations in China, mainly in a tech sector that thrived during years of relatively laissez-faire market regulation.

It also mirrors the increasing activism of U.S. and European antitrust authorities in recent years.

The Beijing-headquartered agency plans to expand its antitrust workforce by around 20 to 30 staff, up from about 40 now, two people with direct knowledge of the matter said.

The watchdog also plans to delegate case reviewing power to its local bureaux and source additional manpower from other government bodies and agencies to handle cases that require extensive investigation, four other people said.

Budgets allocated for antimonopoly investigations, daily operations and research projects will also be increased, said three of the people cited above and one more person with knowledge of the matter.

The people declined to be named as they were not authorised to speak to the media.

The SAMR did not immediately respond to Reuters request for comment.

"An increase in staffing as well as in the quality of the bureau's law enforcement capabilities is a must for an antitrust push," said Liu Xu, a researcher at the National Strategy Institute of Tsinghua University.

"Otherwise regulators won't be able to handle multiple cases at one time, and the public will question how transparent the investigation process would be," said Liu, a long-time advocate for antitrust enforcement.

The SAMR's antitrust bureau was established in early 2018 after two other government departments were merged into it to form a single authority to police monopoliÂ­stic activities.

The bureau has also been armed with new and more stringent laws in the past few months.

SAMR's enhanced powers come as Chinese President Xi Jinping weighed in last month on the need to "strengthen antitrust powers" to rein in behemoths that play a dominant role in the country's consumer sector.

"They didn't feel they had the mandate to do it but now they do. And they are happy about that," said a legal source close to SAMR, referring to the need to regulate the internet companies, which, he said, were seen as "a bit above the law."

With growing scrutiny, executives of major internet firms are now required to make routine reports to the antitrust bureau for merger deals or of practices that could fall foul of antimonopoly rules, one of the sources said.

Reeling from the workload, the SAMR has started to expand its presence in more cities such as Hangzhou and Shenzhen on a trial basis, instead of handling the cases all in Beijing, to delegate case reviewing power to local bureaux, two of the sources said. It has also started outsourcing more research work, covering areas including economic and industry analysis, to scholars and its own consultancy committee to speed up cases in progress, one of the sources said.

For now, however, the investor focus is on who among the home-grown technology champions will be the next target of the Chinese antitrust watchdog.

"Other tech companies would be wise to assume they may be receiving the same level of scrutiny and penalty," said Fred Hu, chairman of private equity firm Primavera Group, referring to the fine imposed on Alibaba.

"The heavy fine on one of the country's dominant tech leaders also sends a strong message to the broader tech sector that the Chinese regulators, like their European counterparts, are serious about cracking down on Big Tech."