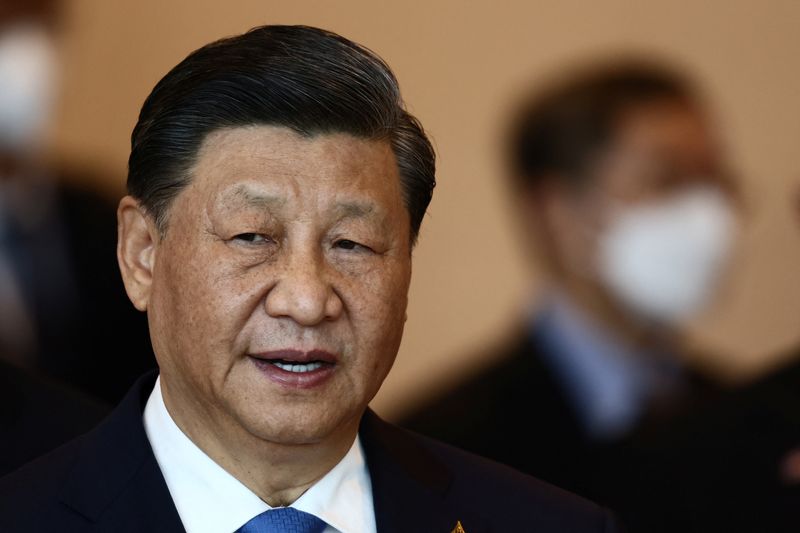 RIYADH (Reuters) -Saudi Arabia aims to increase trade with Beijing and discuss regional security when China's president visits Riyadh this week, with the kingdom seeking to expand superpower ties beyond the increasingly fractious alliance with the United States.

Crown Prince Mohammed bin Salman is expected to mark Xi Jinping's arrival on Wednesday with a lavish welcome that diplomats in the region have said may contrast starkly with the muted reception offered to U.S. President Joe Biden in July.

Chafing at what it sees as American disengagement from the Middle East and the Biden administration's hectoring about human rights, the world's biggest oil exporter is reshaping its foreign policy to reflect the new realities of global power.

Besides rolling out the red carpet for bilateral meetings with Xi during his two-day visit, the Saudi rulers will also convene fellow Gulf dynasts for a summit with him, followed by a wider gathering with other Arab leaders.

That reflects what Saudi state news agency SPA described as the "strategic partnership" that is emerging between China and Saudi Arabia, its main oil supplier, after years of growing ties.

The United States, which for decades has been Saudi Arabia's main security guarantor and which remains its main defence supplier, has expressed concerns about growing Chinese involvement in sensitive infrastructure projects in the Gulf.

Crown Prince Mohammed, better known as MbS, has resisted previous U.S. efforts to constrain Saudi action, including in its war in Yemen, and appeared to welcome the transactional approach of former U.S. president Donald Trump.

When Trump came to Saudi Arabia in 2017, MbS demonstrated the warmth of their relations with an extravagant welcome ceremony that the diplomats said was expected to resemble that he will offer Xi.

Trump left Riyadh with more than $100 billion in defence contracts. The Chinese delegation this week is expected to sign agreements worth $30 billion with Saudi Arabia, SPA reported.

China sees Saudi Arabia as its key ally in the Middle East due not only to its oil exports but also a shared suspicion of Western interference, especially on issues such as human rights.

Foreign Minister Wang Yi said in October that Saudi Arabia was a "priority" in China’s overall and regional diplomatic strategy.

However, unlike the United States Beijing retains good ties with Riyadh's overarching regional rival Iran, another supplier of oil to China, and has shown little interest in addressing Saudi political or security concerns in the region.

Although China has taken a more involved role in global politics in recent years, its relationship with Saudi Arabia remains firmly rooted in trade.

Besides oil sales, Saudi and Chinese state companies have joint ventures in refining and petrochemicals, and Riyadh is seeking foreign investment to help it diversify its economy into manufacturing, including of cars and arms.

Its plans for massive infrastructure development, including the $500 billion NEOM megaproject in the northwest, could also create new opportunities for Chinese construction companies that have grown increasingly active in the Gulf.

(Reporting by Aziz El Yaakoubi in Riyadh and Eduardo Baptista in Beijing;Writing by Angus McDowall; Editing by Frank Jack Daniel and Nick Macfie)