China study warns of 'colossal' COVID outbreak if it opens up like U.S., France 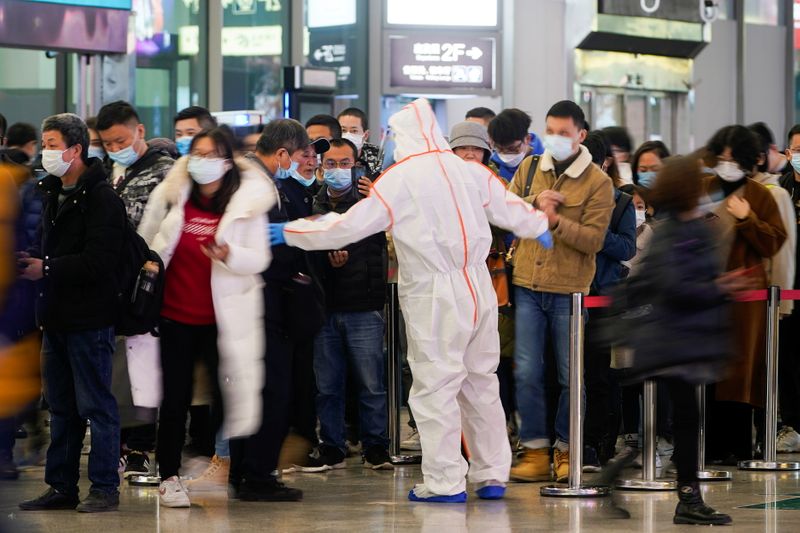 A security guard blocks an exit as he directs people to scan a QR code to track their health status at Shanghai Hongqiao Railway Station, following new cases of the coronavirus disease (COVID-19), in Shanghai, China, November 25, 2021. Picture taken Novem

BEIJING (Reuters) - China could face more than 630,000 COVID-19 infections a day if it dropped its zero-tolerance policies by lifting travel curbs, according to a study by Peking University mathematicians.

In the report published in China CDC Weekly by the Chinese Centre for Disease Control and Prevention, the mathematicians said China could not afford to lift travel restrictions without more efficient vaccinations or specific treatments.

Using data for August from the United States, Britain, Spain, France and Israel, the mathematicians assessed the potential results if China adopted the same pandemic control tactics as those countries.

China's daily new cases would reach at least 637,155 if it adopted the United States' pandemic strategy, the report said.

"The estimates revealed the real possibility of a colossal outbreak which would almost certainly induce an unaffordable burden on the medical system," the report said.

"Our findings have raised a clear warning that, for the time being, we are not ready to embrace 'open-up' strategies resting solely on the hypothesis of herd immunity induced by vaccination advocated by certain western countries."

The mathematicians cautioned that their estimates were based on basic arithmetic calculations and that more sophisticated models were needed to study the evolution of the pandemic if travel restrictions were lifted.

China has maintained a zero-tolerance policy towards COVID-19, saying the importance of containing local cases when they are found outweighs the disruptions caused by efforts to trace, isolate and treat the infected.

China reported 23 new confirmed coronavirus cases for Nov. 27, down from 25 a day earlier, its health authority said on Sunday.

The World Health Organization (WHO) on Friday designated a new COVID-19 variant detected in South Africa with a large number of mutations as being "of concern", prompting some countries to impose travel curbs.