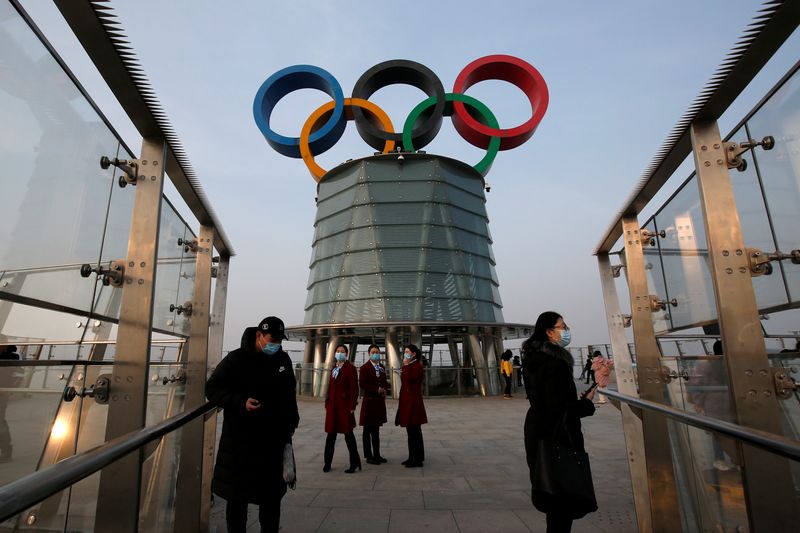 BEIJING (Reuters) - The Winter Olympics, due to begin in one year, offer China a chance to show off its epidemic controls, dazzle with spectacle and seize a publicity win on the world stage - but human rights concerns and COVID-19 uncertainty cast a cloud over the games.

Organisers promise a "joyful rendezvous upon pure ice and snow" that will kick off on Feb. 4, 2022. Artificial powder will likely be needed to help cover the slopes carved out on the brown, arid mountains to Beijing's northwest.

"China will want the Olympics to set a new narrative that is about the country opening up to the world again," said Rana Mitter, who teaches Chinese history and politics at Oxford University.

Under President Xi Jinping, China has tightened control over civil society and clamped down on dissent, even as its economy recovers robustly from COVID-19 and Beijing asserts itself on the global stage. Rights groups and some Western politicians have condemned China's hosting of the games, citing Beijing's policies in Hong Kong and Xinjiang.

The COVID-19 pandemic, which has delayed the much larger 2020 Tokyo Summer Olympics, is unlikely to be fully controlled globally by next February, health experts say.

But China has smothered most outbreaks within its borders, keeping new case numbers low.

Borders are currently closed to most foreigners, and it is not yet clear how Beijing will manage visiting athletes and delegations. The Olympics organising committee did not immediately respond to a request for comment.

Wang Huiyao, president of the Center for China and Globalization, a Beijing think-tank, said demonstrating control over the virus while providing global entertainment would help other countries see past ideological differences and burnish China's image.

Beijing's first Olympics, the 2008 Summer Games, demonstrated China's ability to put on a show on an unprecedented scale. Some facilities built for 2008, including the Bird's Nest Stadium, will be re-used.

Others have been newly built near the city of Zhangjiakou in Hebei province, connected to Beijing by high speed rail.

Shortly after President Xi toured facilities in January, officials vowed they would "not let down the great trust and expectations of the Party and the people".

British Foreign Secretary Dominic Raab said in October he had not ruled out Britain boycotting the Olympics due to China's treatment of the Uighurs, a Muslim minority in its western Xinjiang region.

A group of more than 180 rights groups issued an open letter on Wednesday calling on countries to boycott the games to avoid an "endorsement" of China, which the letter called "one of the world's worst human rights violators".

China has denied accusations of persecution and forced labour in Xinjiang, and defended its security crackdown in Hong Kong as necessary.

Sophie Richardson, China director for HRW, said it had yet to receive a formal response. China's response to activism by athletes is one of her many concerns about the games, she said.

"What's going to happen when athletes want to use WeChat and offer comments that are critical of the Chinese government?" she said, referring to the chat app, ubiquitous in China, which is subject to the country's online censors.

The IOC told Reuters it has raised human rights issues with China's government. Beijing gave "assurances" on rights, media freedom and internet restrictions, according to an IOC evaluation document.