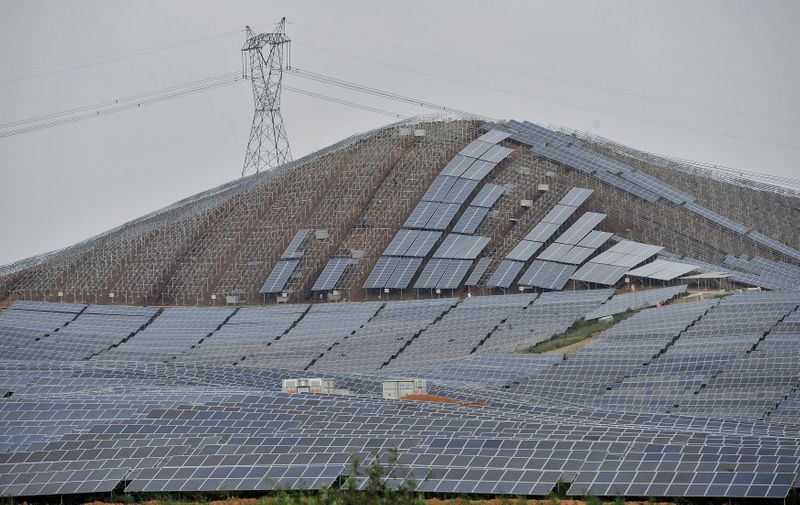 FILE PHOTO: An electricity pylon is seen above a solar power plant which is under construction on a hill in Wuhu, Anhui province, September 16, 2014. REUTERS/Stringer

Pending tasks include raising investor awareness of the environment, harmonising fragmented rules and tackling 'greenwashing', or issuers' efforts to inflate their green credentials, they said. At stake is Beijing's goal of net zero carbon emissions by 2060.

Chinese issuers including banks, property developers, power generators and railway operators sold $15.7 billion of bonds during January-March period to fund 'green' projects such as clean and renewable energy, according to Refinitiv data.

The volume of such bonds, mostly yuan-denominated, almost quadrupled from a year earlier, the data showed.

For a graphic on global green bond issuance, click https://fingfx.thomsonreuters.com/gfx/mkt/qmyvmrlkgpr/global%20issuance%20in%20Q1.jpg

That exceeds the roughly $15 billion of such bonds sold by U.S. issuers in the first quarter, and helped drive a tripling of green bond issuance globally.

Green bonds blossomed "largely thanks to China's recovery from the coronavirus," said Nathan Chow, strategist at DBS. "In addition, the Chinese government is going all out to develop this market this year."

With roughly 800 billion yuan of green bonds outstanding, China is already the world's second-biggest green bond market after the United States. However, green bonds account for less than 1% of China's $18 trillion bond market.

At this stage, "companies have no cost advantages issuing green bonds... and there's not enough market support for many green projects which take a long time to complete and are seen as risky," said CICC economist Zhou Zipeng.

Several fund managers said green bonds are not yet on their investment radar.

"The only thing Chinese investors currently look at is yield. So obviously if green bonds cannot offer the extra returns, they ask the government, 'what can you do to help me?'," said Ricco Zhang, Asia-Pacific director of the International Capital Market Association (ICMA).

A brokerage source said state-owned companies were motivated to issue green bonds to align with government priorities, but investors lacked incentives to buy them.

Moving closer to international standards by excluding coal from the green market would widen the potential foreign investor base, Chow of DBS said.

"Sometimes it's hard for international investors to have a granular understanding of different (Chinese) green bonds. This brings challenges for green investors to identify the right target for investment," he said.

For a graphic on China's green bond issuance, click https://fingfx.thomsonreuters.com/gfx/mkt/nmovaralqpa/China's%20issuance.jpg