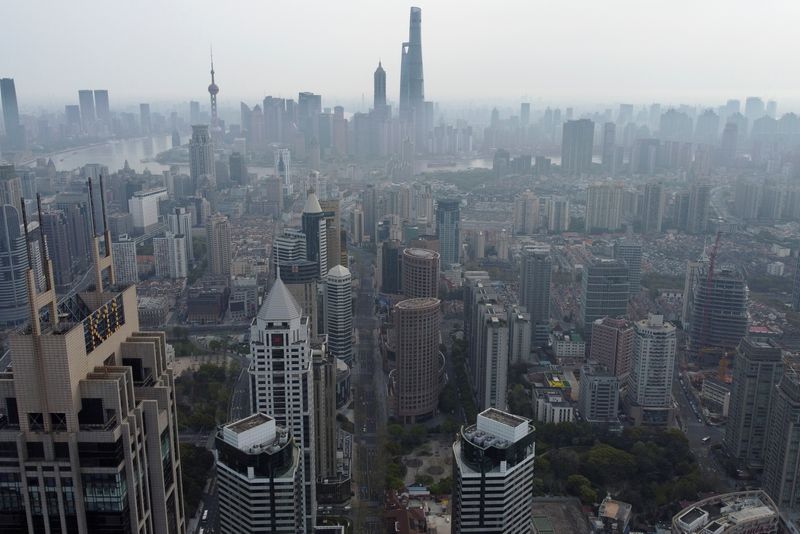 An aerial view shows the Lujiazui financial district and other buildings along the Huangpu river amid a lockdown to contain the spread of the coronavirus disease (COVID-19) in Shanghai, China March 30, 2022. Picture taken with a drone. REUTERS/Aly Song

Strong demand for banker's acceptance bills - debt instruments guaranteed by banks - has pushed yields on one-month bills to an average of less than 1% and as low as 0.04% since the beginning of Shanghai's COVID-19 lockdown in late March, according to data from the Shanghai Commercial Paper Exchange.

That compares with an average yield of 2.07% during the first three months of the year. It is also well below banks' own interbank borrowing cost of around 2%.

The surge in demand for short-term instruments reflects a quirk of Chinese regulations, by which banks' commercial paper holdings are counted as short-term lending, said Raymond Yeung, Greater China chief economist at ANZ.

"This allows banks to 'window dress' their loan books by purchasing banker's acceptance bills so that they can meet the loan targets," he said.

"There is especially a lot of pressure to meet targets on loans to private firms. But where on earth can we find so many good projects? In order to meet targets, the only way is to buy bills, even if yields are low," he said.

While commercial paper financing contributed to most of the fresh corporate loans extended in April, overall new lending in China plunged about 80% from March, and hit the lowest in nearly 4-1/2 years.

The authorities have taken steps to support hard-hit sectors of the economy and encourage lending, but lockdowns have eroded the effectiveness of easing and muted demand more than supply, said Robin Xing, chief China economist at Morgan Stanley.

"In a normal year without COVID, it takes about three to six months until easing measures have a strong, clear pass-through to broad-based activities," Xing said. "But this year, given the lockdowns, the pass-through will be longer."

The increasingly common practice of buying bills to meet loan targets has already sparked criticism from banks and exchange officials.

Such activity is the main contributor to trading volatility in the commercial paper market, and creates a disconnect between prices of commercial paper and other similar assets, Xie Jinglei, an official at the monitoring department of the Shanghai Commercial Paper Exchange, wrote in a paper posted on the exchange website.

Guo Xinqiang, vice manager of Zheshang Bank's commercial paper business, said in a working paper that adjustments are needed to curb the practice, as banks buying commercial paper on the secondary market does not channel money into the real economy.

Such activities distort interest rates, "incentivise illegal arbitrage, and reduce the authenticity and effectiveness of the central bank's monetary policies."