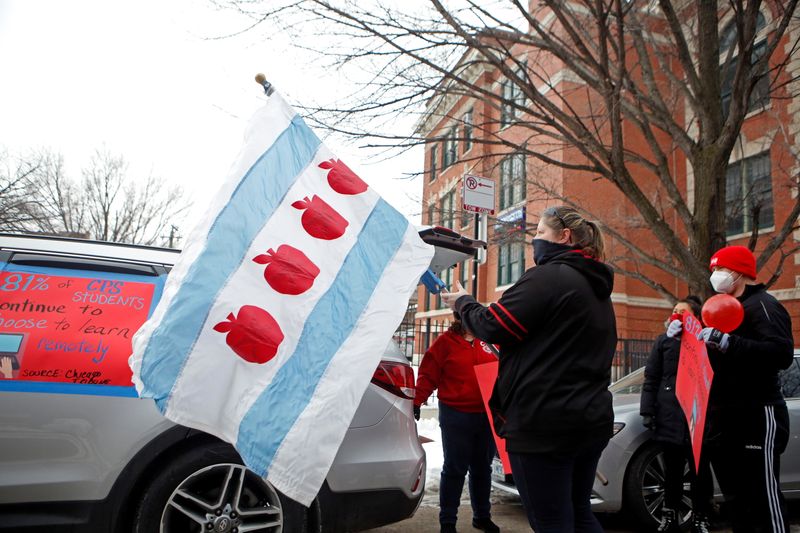 CHICAGO (Reuters) - Chicago schools could gradually start to reopen for in-person learning this week under a tentative agreement with the teachers union on a COVID-19 safety plan, a major milestone that will put an end to a bitter labor dispute and avert a possible strike.

Chicago Mayor Lori Lightfoot announced the deal on Sunday between the nation's third-largest school district and the Chicago Teachers Union, which represents 28,000 educators. The two sides have been locked in talks for months, with teachers demanding stronger safety protocols to prevent the spread of the virus in classrooms.

The Chicago Teachers Union said members have yet to approve the tentative deal.

"What we have is a framework that all of our members must first review and assess, because it is our members who are being asked to return to school buildings in the midst of a global pandemic," the union said in a tweet after Lightfoot's announcement.

After Lightfoot spoke, school district CEO Janice Jackson outlined a plan to bring students, who opt to resume in-person learning, back to schools pending the union's ratification of the agreement.

If approved, pre-kindergarten and special education students would return on Thursday, Jackson said. It is unclear when their teachers would be expected to report to work this week.

"It's important to me to see our students return to the classroom. That sense of normalcy not only will help them become better educated but will bring back so much that has been lost throughout this pandemic," she said.

Over the last three weeks, tensions intensified between the two sides when union membership voted not to return to schools until a deal was reached. Jackson then threatened to lock out 13,000 educators from their online systems if they refused to report to work.

The union has said teachers would stop working altogether, form picket lines and strike if the district retaliated against any members who refused to teach in school buildings.

Similar labor disputes have unfolded across the country, pitting teacher unions against district officials over conditions for reopening, almost a year after the virus shut down schools for 50 million students nationwide.

The labor dispute in Chicago comes 15 months after the cityâs teachers staged an 11-day strike over overcrowded classrooms, support-staff levels and pay.

On Sunday, Lightfoot struck a conciliatory tone with the teachers during her remarks, given that they have taught the district's 355,000 student remotely since the pandemic forced CPS to close school buildings last spring.

"You have been champions. ... I understand that and I want to thank you," she said to teachers.

But the parties remained at odds on vaccinations for teachers and infection metrics used to decide when to close schools. Another sticking point was accommodations for teachers to work remotely if they have or live with people who have medical conditions, the district said.

About 62,000 elementary and middle-school students signed up to take some classes in person starting last Monday. Some 5,200 pre-kindergarten and special education students who chose the same option had been taking classes in their schools up until Jan. 26, when the district canceled in-person instruction for them because of the dispute.

The district has yet to announce when high school students will have the option to return to school.