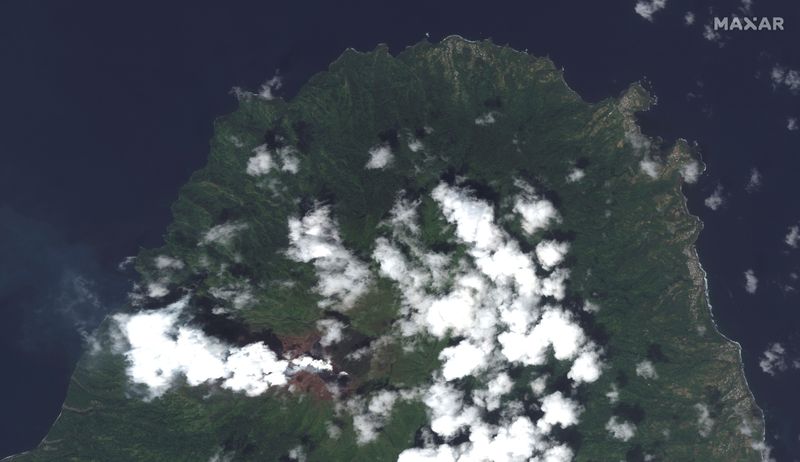 KINGSTOWN, Saint Vincent and the Grenadines (Reuters) - The tiny eastern Caribbean island of Saint Vincent was rocked by a fifth day of eruptions from the La Soufriere volcano on Tuesday as leaders warned of shortages of water and the potential need for hundreds of millions of dollars to rebuild.

The explosion happened around 6 a.m., causing another billowing plume of smoke and ash as well as pyroclastic currents of ash and rock hurtling down the volcano's flanks. Officials have warned it could continue to be active for months.

Ash blankets much of the island, as thick as 8 inches (20 cm) in some parts. It has destroyed crops, contaminated water, killed animals and devastated infrastructure, also rendering some roads impassable, complicating search and rescue efforts.

So far, there have been no reports of casualties or injuries. Damages for an eruption in 1979 were $100 million. But residents are struggling to deal with supply shortages.

âWe are still looking for drinking water and food,â said Jenetta Young Mason, 43, who fled from her home in the danger area to stay with relatives.

Prime Minister Ralph Gonsalves said some supplies from neighboring countries had started rolling into the island nation of just over 100,000 residents, during a press conference broadcast on a local station. But more help was needed.

The Central Water and Sewage Authority has been unable to harvest any water from the water sources since the volcano erupted, government spokesman Sehon Marshall said, which has resulted in a more than 50% depletion of water storage.

Some Caribbean islands have delivered cots, food, masks and respiratory tanks, and the World Bank said it intended to disburse $20 million to the government via an interest-free catastrophe financing program.

Dormant for decades, the volcano first erupted on Friday, prompting between 16,000 and 20,000 people to evacuate from surrounding areas, with many staying in shelters near the capital of Kingstown.

Government efforts to shelter people are being complicated by protocols to limit the spread of COVID, including caps on the number of people and testing and vaccination requirements.

One of the issues is locals' reluctance to take the vaccine. Kitron Sam, 34, who fled after the eruption, said that officials visited his shelter near Kingstown and offered the vaccine, but no one opted to take it.

(Reporting by Robertson S. Henry in Kingstown and Kate Chappell in Kingston; Editing by Sarah Marsh and Lisa Shumaker)