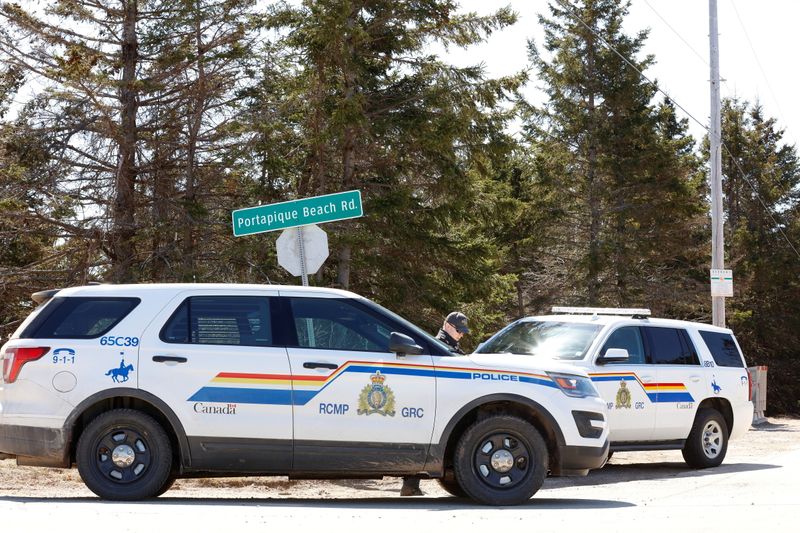 FILE PHOTO: Royal Canadian Mounted Police (RCMP) block the entrance to Portapique Beach Road after they finished their search for Gabriel Wortman, who they describe as a shooter of multiple victims, in Portapique, Nova Scotia, Canada April 19, 2020. REUTE

(Reuters) -The murder rate in Canada last year rose to its highest level since 2005, pushed up in part by the country's worst-ever mass shooting, in which 22 people died, Statistics Canada said on Thursday.

Statscan also noted societal stresses it said had been caused by lockdowns linked to the COVID-19 pandemic.

The Canadian rate has gradually declined since its last recent peak in 1991 of 2.69 homicides per 100,000 population.

"While homicide continues to be a relatively rare occurrence, representing less than 0.2% of all violent crimes in Canada in 2020, homicide rates are considered benchmarks for levels of violence," Statscan said in a commentary.

The Canadian increase was driven by more murders in the provinces of Alberta and Nova Scotia.

Gabriel Wortman killed 13 people in Nova Scotia on the night of April 18, 2020, and another nine the next day before police shot him dead.

This contributed to an "uncharacteristically high homicide count and rate for the province," Statscan said.

The two most populated cities in Alberta, Calgary and Edmonton, recorded large increases, and each contributed 15 more murders to the national tally than in 2019.

There were 15 more firearm-related killings in Canada last year, compared with 2019, and gang-related murders decreased 10% in the same period.

(Reporting by Ismail Shakil in Bengaluru and David Ljunggren in Ottawa; Editing by Giles Elgood and Jonathan Oatis)