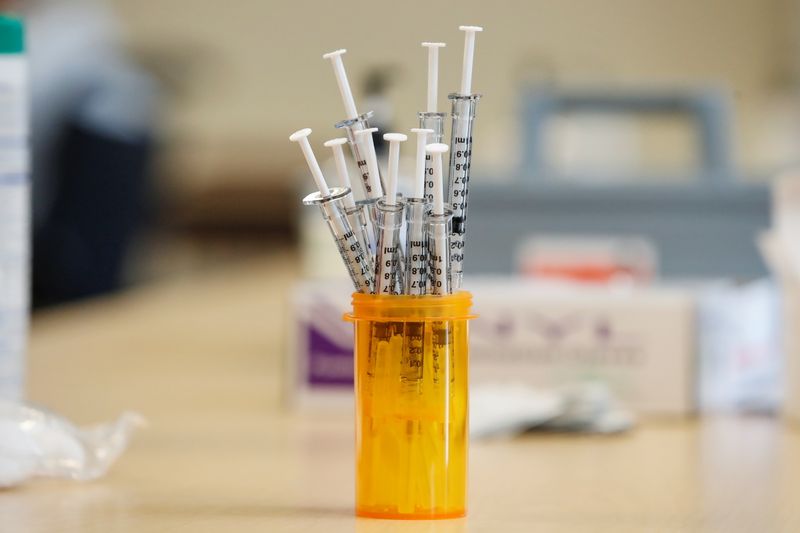 Syringes with the Pfizer-BioNTec vaccine against coronavirus disease (COVID-19) sit on the table at the Victor Walchirk Apartments in Evanston, Illinois, U.S. February 22, 2021. REUTERS/Kamil Krzaczynski

BRASILIA (Reuters) - COVID-19 cases and deaths in the United States fell by 30% in the last week and were declining in most South American nations, but vaccines will take months to have an impact on the virus, the Pan American Health Organization (PAHO) said on Wednesday.

PAHO Director Carissa Etienne urged governments and manufacturers to speed up delivery of vaccines to the region where one million people became sick and 34,000 died in the past seven days.

As of this week, 78 million people have been vaccinated in the Americas, the vast majority of them in North America, and only 13 million in Latin American and the Caribbean, she said.

"This is not enough, and it is not acceptable," Etienne said in a virtual briefing from Washington.

One glimmer of hope is offered by the U.N. and GAVI-led COVAX facility to provide equitable access to vaccines, she said, with hundreds of thousands of doses to be delivered in the next few weeks to countries signed up for the initiative.

The drop in cases in the Americas has largely been driven by dramatic reductions in new infections in the United States, as a result of tighter public health measures with higher public adherence and better coordination in the vaccine roll out, she said.

One year after the pandemic began, nearly 50 million people have become infected with the virus in the Americas, or roughly the entire population of Colombia, according to PAHO.

"While news outlets are reporting major declines in COVID-19 cases, I want to emphasize that we are certainly not out of the woods," she said.