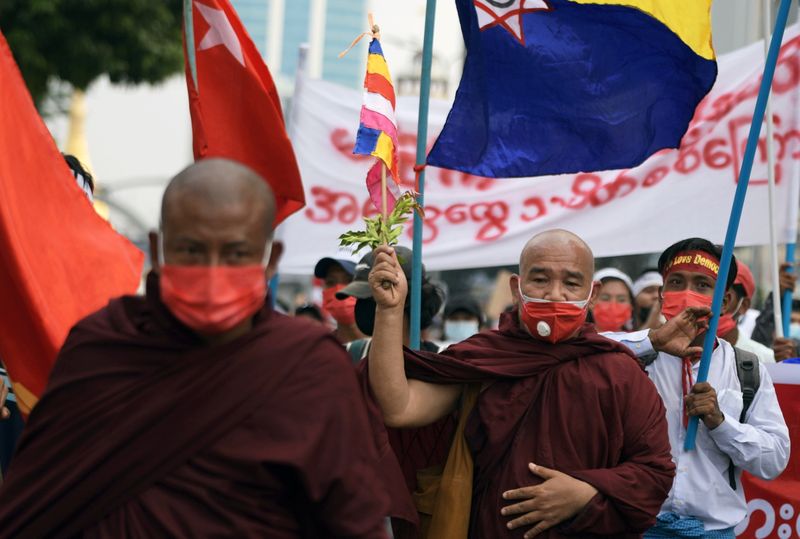 FILE PHOTO: A Buddhist monk holds a flag during a protest against the military coup in Yangon, Myanmar, February 22, 2021. REUTERS/Stringer

In a condemnation of the crackdown on pro-democracy demonstrators, the government-appointed organisation also said in a draft statement that its members intended to halt activities, the Myanmar Now news portal reported.

Monks have a history of activism in Myanmar and were at the forefront of the 2007 "Saffron Revolution" against military rule, an uprising that, although suppressed, helped usher in democratic reforms. A rift with the authorities would mark an important boost for opponents of the ruling generals.

Protest flared across the country again on Wednesday and nine demonstrators were killed by security forces in the commercial capital Yangon, second city Mandalay and elsewhere, the Assistance Association for Political Prisoners (AAPP) activist group said.

The total documented number of people killed in the weeks of unrest since the Feb. 1 coup now stood at 217 but the actual toll was probably much higher, the AAPP said.

Pope Francis added his voice to international appeals for an end to the bloodshed. "Even I kneel on the streets of Myanmar and say 'stop the violence'," he said.

For its part, the junta was building its case against Myanmar's elected leader, Aung San Suu Kyi, who has been held in detention in an undisclosed location since the army overthrew her civilian government.

State-controlled MRTV television showed a businessman saying he had given her about $550,000 in illegal payments in 2019 and 2020. The longtime democracy champion could face a lengthy prison sentence and be barred from politics if convicted. Her lawyer could not be reached for comment.

Protesters confronted security forces over a sandbag barricade on one street in the main city of Yangon. Police opened intermittent fire and one man appeared to get shot in the head, according to footage on social media.

Reuters could not verify the video. Media reported that authorities forced Yangon residents to dismantle barricades and threatened to open fire in neighbourhoods that did not do so.

Two protesters were killed in the central town of Kale, the BBC reported, while several hundred people gathered in the eastern town of Demoso, Pathein in the Irrawaddy river delta and Dawei in the south, pictures on social media showed.

A junta spokesman did not answer telephone calls seeking comment.

The army has said it took power after its accusations of fraud in a Nov. 8 election won by Suu Kyi's National League for Democracy (NLD) were rejected by the electoral commission. It has promised a new election, but not set a date.

The reported stance of the Buddhist monks' association, known as the State Sangha Maha Nayaka Committee, would signal a significant rift between authorities and a group that usually works closely with the government.

Members could not be reached for comment but Myanmar Now said it planned to release a final statement after consulting the religious affairs minister on Thursday.

Meanwhile, a property developer named Maung Weik appeared on state-controlled MRTV and alleged Suu Kyi had taken four different illegal payments from him totalling about $550,000 in 2019 and 2020 when she was Myanmar's de facto civilian leader in the role of State Counsellor.

The junta announced last week it was investigating the Nobel peace laureate on suspicion of bribery, adding to a variety of separate charges that include illegally importing communications equipment and violating anti-coronavirus rules.

"According to the testimony of U Maung Weik..., Aung San Suu Kyi is guilty of bribery and the anti-corruption commission is investigating to take action under anti-corruption laws," MRTV said.

Her lawyer dismissed the initial accusation last week as a joke. Several Western governments have also denounced the charges as fabricated. But if convicted, she is likely to be removed from the political scene for a long time.

The junta also acted to further restrict internet use, cutting public WiFi access that has been used by people to share information in the absence of mobile data access. It is now limited to only those with a private fixed line connection.

Parts of Yangon are under martial law and thousands of residents have fled the industrial suburb of Hlaingthaya, where security forces killed 40 people on Sunday and Chinese-financed factories were set ablaze.

Workers said a dispute over pay at a Chinese-owned factory in the industrial zone turned violent on Tuesday after the owner called the security forces. They shot dead a woman labour leader and at least four more people. Myanmar Now said six people were killed.

China's state media have warned of unspecified action if there are further attacks on Chinese-owned businesses.

Many people in Myanmar believe Beijing is backing the military. Unlike Western powers, China has not condemned the coup and, along with Russia, has prevented the U.N. Security Council from denouncing the military's actions.

The junta also charged the acting leader of a parallel civilian government, Mahn Win Khaing Than, with treason, the Democratic Voice of Burma reported.

Mahn Win Khaing Than, who is on the run, is a senior member of Suu Kyi's party. He was appointed this month by a panel of ousted lawmakers pushing for recognition as the rightful government.