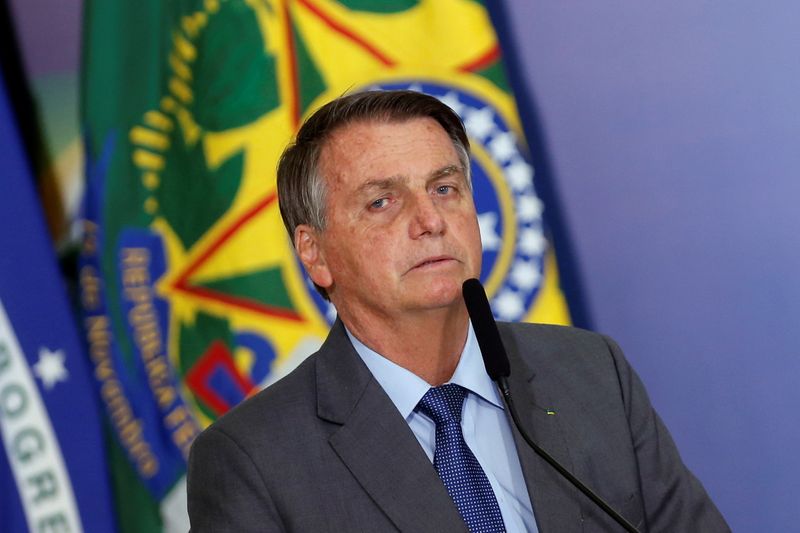 Brazil's President Jair Bolsonaro talks during a ceremony of signing a decree establishing the Public Integrity System of the Federal government at the Planalto Palace in Brasilia, Brazil July 27, 2021. REUTERS/Adriano Machado

BRASILIA (Reuters) - Brazilian President Jair Bolsonaro appointed center-right Senator Ciro Nogueira as his chief of staff on Wednesday to shore up waning political support in Congress, and recreated the labor ministry to deal with record unemployment.

Nogueira, a leader of the Progressives Party (PP) to which lower house speaker Arthur Lira also belongs, will be Bolsonaro's closest aide and minister, replacing a retired general.

His appointment is aimed at improving the far-right president's relations with Congress, where there have been dozens of requests for his impeachment as his popularity drops during the world's second-deadliest COVID-19 outbreak.

A Senate investigation has uncovered potential irregularities in the government's purchase of COVID-19 vaccines needed to fight a pandemic whose gravity Bolsonaro has minimized despite the deaths of more than 550,000 Brazilians.

Only the United States has recorded more deaths from the pandemic.

Bolsonaro also appointed Onyx Lorenzoni to head a new Ministry of Labor and Social Security tasked with tackling record unemployment exacerbated by the pandemic. Brazil's jobless rate was at a historic high of 14.7% in April.

The labor ministry, dating back to 1930, was dissolved by Bolsonaro on his fist day in office on Jan. 1, 2019, as he sought to reduce the size of the state's involvement in the economy under free-market Economy Minster Paulo Guedes.

Lorenzoni will be responsible for labor policies aimed at generating employment and supporting workers, according to a decree issued by Bolsonaro recreating the ministry.

The appointment of Nogueira is expected to make his PP party the main component of any coalition that Bolsonaro will try to build to seek re-election next year.

Recent opinion polls show Bolsonaro's popularity plummeting over his handling of the coronavirus pandemic and say he would be defeated handily by leftist former president Luiz Inacio Lula da Silva if the election were held now.

To make matters worse, the Senate probe has implicated the government's chief whip in the lower house of Congress, Ricardo Barros, also of the PP party, in a scandal surrounding a purchase contract for 20 million doses of the Covaxin vaccine made by India's Bharat Biotech. Barros and Bolsonaro deny wrongdoing.