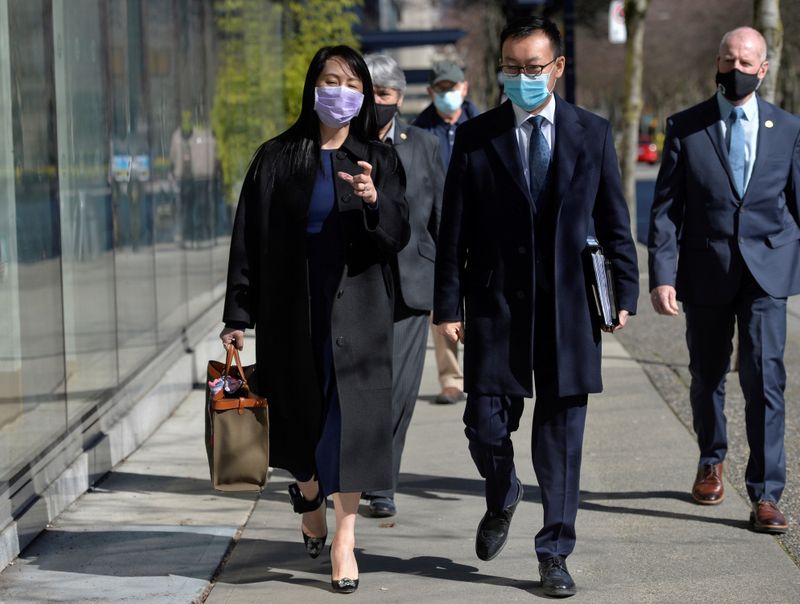 VANCOUVER (Reuters) - A lawyer for Huawei Chief Financial Officer Meng Wanzhou told a Canadian court on Thursday that border agents who questioned her at the Vancouver airport were "untruthful" when they said they handed over Meng's phone passcodes to police by accident.

Meng, who was arrested at Vancouver International Airport in

2018 on a U.S. warrant for bank fraud, is accused of misleading

business dealings in Iran, causing the bank to break with U.S.

Meng, 49, and Huawei maintain she is innocent. For more than

two years, she has been fighting extradition to the United States while under house arrest in Vancouver.

Diplomatic relations between China and Canada have soured

over the issue. China detained two Canadians on suspicion of espionage soon after Meng's arrest and they face trial this week and next, ramping up the tension between the two countries.

Defense lawyer Tony Paisana told a British Columbia Supreme Court judge the agents abused their statutory powers, and would not have acted as they did if they were conducting a "bona fide" border exam. He asked why the agents took Meng's electronic devices butdid not search them, and why they asked for passcodes when theyknew they would not use them.

Paisana said border officers who testified about accidentally giving passcodes over to police were "untruthful" under oath. "These officers deliberately tried to deceive you,â he told the judge. The evidence suggested that the information was collected for the FBI, Paisana said.

Meng's legal team has demanded her extradition request be denied, arguing that abuses of process took place during her arrest and that her rights were violated.

Defense attorney Mona Duckett said border officers who testified at Meng's extradition hearings last year gave conflicting versions of important events. She quoted testimony from multiple border agents who were asked what authority allowed them to take phones and passcodes. Although each gave different answers, she said none of the agents could articulate what reasonable grounds they had.

"I say the answer is because there are none," she said.

The Canada Border Services Agency was not immediately available for comment.

The RCMP declined to comment. Meng's extradition hearing is expected to wrap up in May, although a decision could be appealed, which would delay the final outcome.